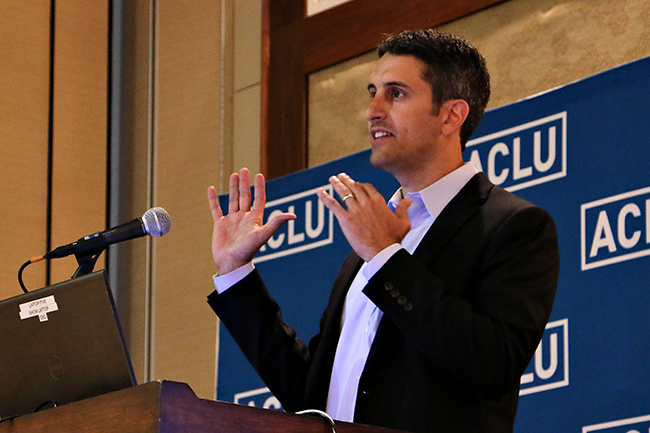 Public demand for privacy protections is at an all-time high, leading technology companies to explore new tactics to restrict over-surveillance, according to the keynote speaker at a conference hosted by the American Civil Liberties Union of Texas on Wednesday.

Alexander Abdo, staff attorney of the ACLU’s Speech, Privacy and Technology Project, spoke about the role technology companies have in protecting individual privacy in light of recent breaches of information such as the 2013 National Security Agency surveillance leak. The leak released information about Americans detailing a mass data collection being undertaken by the government.

Overreaching surveillance affects everyone because there are massive databases that store incredibly sensitive information, according to Abdo.

“Some people even call these ‘databases of ruin’,” Abdo said. “Leaked information puts us at risk. On a more societal level, surveillance affects the ability of journalists and dissidents to do their work. Even if you don’t have anything to hide, you have a lot to fear from the loss of privacy.”

According to Abdo, companies have been taking action by creating better technological and policy solutions to prevent overreaching surveillance. One technological advancement designed to fight privacy loss is end to end encryption, a feature found on Apple’s iMessage.

“This allows individuals to communicate securely with others by ensuring that intermediaries who are passing communications from point A to point B cannot read the message,” Abdo said.

Several companies have adopted an updated policy that informs users of a government information request before handing the user’s information over. Once the users are notified, they can challenge the government request, and, if they are successful, no information will be released.

Although some companies changed their behavior after the NSA leak, not all individuals did the same.

Political consultant Joshua Cohn said he changed his behavior to a small degree in an effort to protect his privacy.

“I think that if I did change my behavior it wasn’t an outright decision,” Cohn said. “It was more just knowing that every time I typed something into a webpage it was being monitored.”

“Too many people use the same password now and that creates poor security,” Abdo said. “Avoid services that needlessly use and track your information, like Google. Use browsers like DuckDuckGo or StartPage.”

Companies are heading in the right direction but they still need to recognize that information is a liability because of hackers and overreaching surveillance, according to Abdo.

“Don’t keep information if you don’t need it,” Abdo said. “And if you do keep it, secure it.”