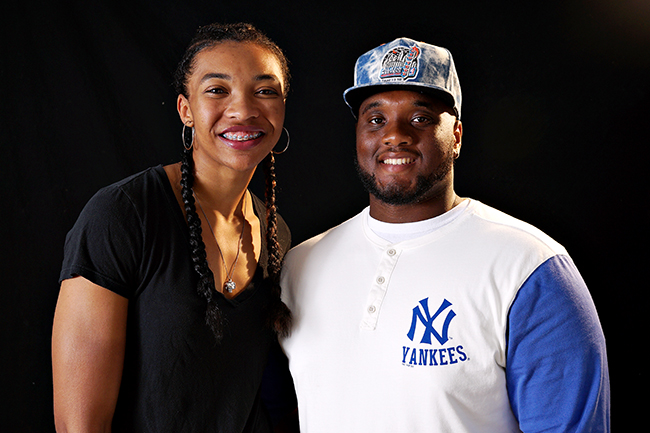 It was Jan. 17, family day for the women’s basketball team. Texas defeated Texas Tech 55-44, and the players were headed to eat lunch and introduce their families.

For center Imani Boyette, a junior at the time, it was just another family day, meaning none of her family, who lives in Los Angeles, would be there.

But to Imani’s surprise, her older cousin, Darryl Barnes, flew in from California. She wondered why he didn’t inform her ahead of time. She hates surprises.

Then things got stranger. The seniors broke tradition and introduced their families before the juniors did. Then-junior guard Brady Sanders told Imani she was going last.

“When I got to the end of introducing everyone, my coach told me to stay up at the front, and a song came up,” Imani said. “Girls started screeching, my older boy cousin had a bouquet of roses, and my little girl cousin had the ring and he got down on one knee and proposed.”

Paul Boyette Jr., a junior defensive tackle, planned the proposal for two months. His parents, brother and sister-in-law were there. Paul made sure Barnes was there as well. Paul told Imani’s parents a week earlier what he had planned. Imani was the only one who didn’t know what Paul had planned.

While the proposal was a surprise, Imani and Paul had discussed marriage before. They had been dating for two and a half years, following a first date at Wendy’s.

“He was a gentleman and bought my nugget meal,” Imani said. “We just chopped it up. Nothing special.”

They met in San Jacinto dormitory, where they lived across the hall from one another.

“I could tell from the first time I saw them interacting that they had no choice but to get married,” said Krystle Henderson, a former teammate and one of Imani’s bridesmaids. “They literally complete each other.”

The two got married on July 25 at Chapel Dulcinea in Austin in front of a crowd of about 80 people. Initially, they planned to tie the knot after they graduated, but Paul said last summer made more sense.

“We just knew how hard it was going to be for us to get married after we graduate with us continuing our athletic careers at the next level,” Paul said.

While the couple themselves never had cold feet about marrying young, Imani’s parents worried.

“My mother just wanted to make sure I wasn’t going to wind up barefoot and pregnant, and I would finish school and keep my ambition,” Imani said. “My father on the other hand was combative pretty much until the day of the wedding. Luckily, I took out the objection line.”

The wedding finished with no objections, and now Imani proudly wears the last name Boyette. In a year in which she won the Honda Inspiration Award, was named the Big 12 Sportsperson of the Year and earned All-Big 12 first team honors, Imani considers getting married the highlight of her year.

The couple knows that professional athletic aspirations may send them to different cities after graduation, but Imani said they would rather face that obstacle as a unit.

Looking ahead, the two hope to start a family. Imani aspires to be an author; Paul, a nursing home owner.

Wherever they end up, Henderson thinks they’ll be happy.

“The world needs more of what Paul and Imani has: real love,” Henderson said.