Science Scene: Searching for the perfect sound wave at ACL 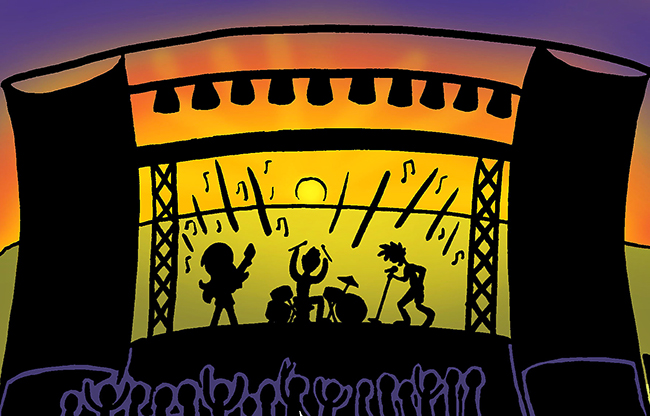 Austin City Limits festivalgoers who hope to bask in the sweat of rock stars force their way to the front of the stage. But fans searching for the perfect sound might want to settle back into the crowd.

To hear the full effects of the entire sound system, audience members should stand at least 35 feet back from the middle of the stage. Before advancements in technology made it easier to control sound, sound engineers struggled to project high-frequency and low-frequency sounds across a wide area. This is why Madonna’s vocals were often more audible than her bass guitarists’ plunking.

An ACL-goer with a taste for bass is in luck these days, however. Zach Richards, director of installations at Big House Sound ­Inc. — one of the companies that controls the speakers at ACL — said the technology that controls low frequencies has improved immensely in the last five to 10 years.

“A bass or synthesizer line that was 30 hertz would have disappeared at a big concert in the eighties,” Richards said. “Technology now has allowed artists to deliver that low-frequency experience.”

The high-tech stages at ACL use stacks of cardioid speakers to control the lower frequencies. These speakers emit sound waves out the back that are opposite to the sound waves coming from the front, cancelling each other out and making the area behind the speaker almost silent. This technique prevents the sound distortion that would otherwise be caused by the low frequency sound waves moving in every direction. Rod Nielson, founder and president of Big House Sound, said it also helps artists on stage.

“The drummer is kicking that drum, it’s rattling and getting into his mics, which then gets re-amplified into the system again, and so it becomes even muddier,” Nielson said. “If you can have cardioid speakers up here, this becomes a very
quiet stage.”

Sound engineers arrange the cardioid speakers horizontally under the front of the stage, next to security. Line array speakers in the two towers beside the stage emit the high frequencies. The engineers call these “J” speakers because the towers bend backward at the bottom, away from the audience, to perfectly project music into waiting ears. Each of these speakers projects waves at a different angle, which the engineers adjust based on the terrain and width of the targeted zone.

The sound from the line array speakers effectively starts at about 35 feet away from the stage, where the waves from the speakers on both sides of the stage meet. In front of this, audience members may have trouble hearing the full effect of the concert. To remedy this problem, sound engineering companies such as Big House Sound have put small high-frequency speakers on top of the low-frequency cardioid speakers in front of the stage.

Still, to get the full effects of the line array speakers, Nielson said listeners may want to stand away from the middle front of the stage.

“I don’t want to be any closer than 12 concert seats away from the stage because I know that the speakers are going to have a difficult time covering me,” Nielson said. “If someone wants to hear the show, and they don’t care about seeing the color of the artist’s eyes, the best place to stand is 12 to 20 seats from the front of the stage.”