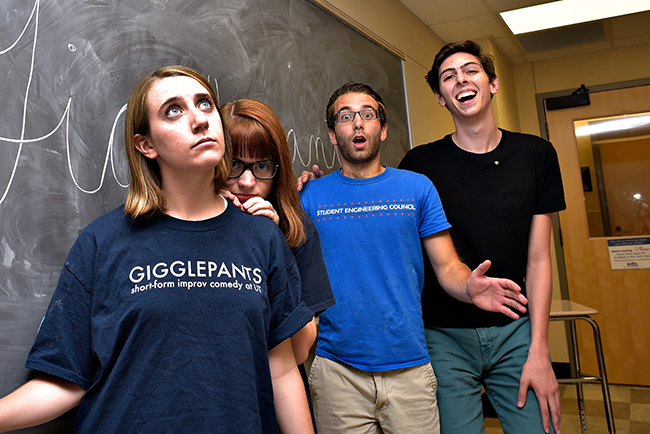 After spending the past four years plucking ideas from thin air onstage, theater senior and improviser Hope Carew has learned to thrive on the unexpected.

As captain of Gigglepants, UT’s only short-form improv comedy group, Carew relies on her ability to roll with the punches. But every now and then, the unexpected strikes offstage.

Last spring while studying abroad in London, Carew found a message in her email inbox from a member of the Upright Citizens Brigade, a premier comedy school and troupe from New York co-founded by Amy Poehler, telling her that UCB wanted to perform at UT, and they wanted Gigglepants to open for them.

“I called my mom internationally, and I was freaking out,” Carew said. “I was like, ‘This is so cool. I’ll be an absolute hero if this works out.’”

Before UCB takes the stage Thursday to perform long-form improv comedy, Gigglepants will perform an improv comedy set of their own. Carew kept the email a secret from her fellow Gigglepants members until early August, when the Campus Events + Entertainment Headliners committee finalized the event.

“It was a stressful ride,” Carew said. “I kept it on the down-low because I didn’t want it to fall through and everyone have their hopes dashed. We’re all huge Amy Poehler fans, so we all know about [UCB]. I saw them at the Paramount two years ago, and it was just unbelievable that they could be so funny.”

Mitchell Ridsdale, a chemical engineering senior and chair of the E+E Headliners committee, said he has been a fan of UCB for several years and pushed for the event to become a reality.

“With improv, you can’t say, ‘Oh, I’m excited to see this one thing,’ because it kind of just goes with whatever is happening — it morphs and molds,” Ridsdale said. “I’m just glad to see a comedy event earlier in the semester than we often do.”

Comedian Jenny St. Angelo, a native of Flower Mound, will perform alongside Mike Kelton, Marshall Stratton and Lindsay Calleran as a member of UCB on Thursday. After graduating from SMU, St. Angelo moved to New York City and began studying at UCB, eventually earning a spot on the group’s TourCo. She said she finds improv comedy more liberating than other acting she has done in the past.

“Because you just have yourself and your team partners on stage, you sort of have the entire universe at your beck and call,” St. Angelo said. “There are touchy subjects that you can talk about in a really intelligent way that you couldn’t do if you had to just be who you look like and sound how you sound.”

During her time in Austin, St. Angelo will also be leading the members of Gigglepants in a long-form improv workshop modeled after those taught at UCB.

Carew said that while Gigglepants members are anxious about opening for a prestigious comedy group, she expects her troupe to rise to the occasion.

“It’s hard when you get nervous for improv because it’s so up in the air,” Carew said. “It’s really challenging, but I find it a lot more rewarding. It’s much more of an accomplishment when things go right.”