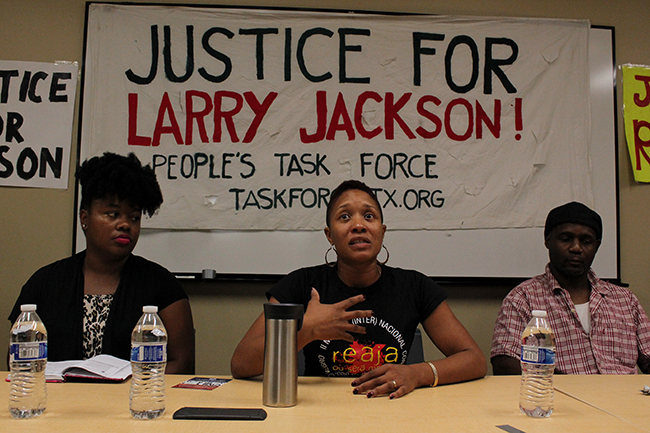 The Black Lives Matter movement must unite groups from different creeds in order to fight a broken justice system, activists said at a panel Thursday.

The panel discussed how the conversation on these issues has recently centered around Texas and Austin, especially after the alleged suicide of Sandra Bland, who was charged in Waller County for resisting arrest and disobeying a lawful order in August.

Christen Smith, professor of anthropology and African and African diaspora studies, said Black Lives Matter is about calling out a broken system that needs to be dismantled since black lives are being devalued.

LaKiza Fowler, who was also a panelist at the event, is the sister of Larry Jackson Jr., an African-American man who was shot and killed on July 27, 2013 by a former Austin Police Department detective who was white.

Fowler said she thought the media reported their own narrative and did not discuss her brother’s humanity.

“What you see on the news is not the whole truth, it’s only bits and pieces of what the reporters are there to do, and that’s their job: to report what they want to report,” Fowler said. “I want people to see Larry’s humanity, Larry was human too.”

Smith said she believes the black community must come together in order to heal one another and to recognize that one death affects all.

“One of the things that I think is extremely important is to recognize that when police kill, they don’t kill just one body, they kill a community of bodies,” Smith said. “That’s because [the family and] the friends who must live after somebody has been killed are resigned to a living death, and that is not life at all.”

Plan II freshman Mia Goldstein said she thought the panel was an important discussion and dialogue.

“The movement itself needs to happen,” Goldstein said. “It’s probably the most dynamic and essential movement in our time, and essentially the second wave of the Civil Rights Movement.”