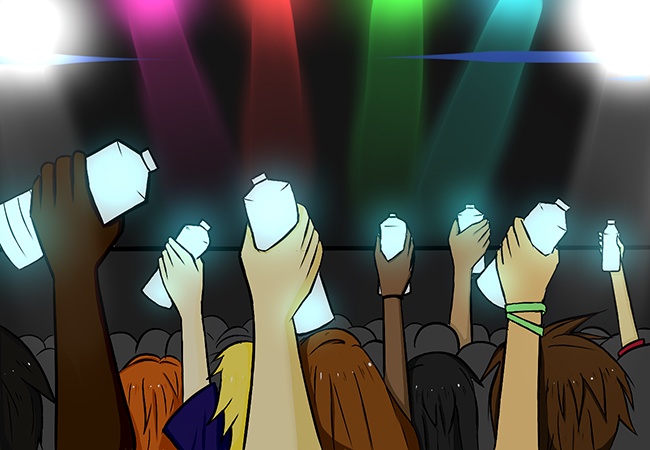 In previous years, festivalgoers have been pulled out from Austin City Limits Music Festival crowds after passing out in the middle of a performance, but by staying hydrated, they can make sure they don’t miss their favorite ACL band or singer’s concert.

Cases of heat exhaustion remain one of the main health concerns for ACL festival patrons. Event safety reports consistently reference the issue, and event organizers have addressed it by increasing the number of medical respondents and making water readily available at the event.

“When it’s really hot outside, you’re not drinking enough water, and you’re engaging in physical activity,” Mupo said. “You could put yourself at risk for heat exhaustion.”

If it’s not treated in a timely manner, heat exhaustion may escalate to a life-threatening heat stroke. It’s important to identify and respond to the symptoms of heat exhaustion, which include nausea, fatigue, faintness and dizziness. In 2014, geology senior Edna Rodriguez nearly passed out during the festival.

“It was a really hot day,” Rodriguez said. “We had some alcohol, and we didn’t fill up our water containers. I was in the middle of a crowd, when suddenly everything started to blur and the sounds around me stopped making sense.”

If ACL attendees experiences any symptoms of heat exhaustion, they should move out of the crowd and into the shade, rest for a while and drink water.

“Someone finally gave me some water,” Rodriguez said. “Immediately after I started drinking, I felt better. I’d never experienced that sensation of instant relief before. I needed water!”

If their symptoms persist, however, attendees should seek medical attention by approaching the medical tent, a police officer or an ACL staff member.

To remain hydrated throughout the event, festivalgoers should aim to arrive comfortably hydrated first. They should plan to bring two one-liter, factory-sealed water bottles as well as empty water containers, such as plastic or aluminum bottles, CamelBak backpacks or hydration packs. The festival will provide free water filling stations to refill containers.  Patrons should plan to visit these stations in-between performances to prepare themselves for the next show.

Buying fruits and vegetables at the ACL food trucks will deliciously aid in hydration. These foods typically have a high water content. Grapefruits, watermelons, celery, lettuce, tomato and strawberries are more than 90 percent water. But, eating fruits and veggies can’t entirely replace water, and attendees should consume these in addition to­ — not instead of ­— water.

Other products that ACL patrons can buy during the festival are electrolyte-rich drinks. Sports drinks help keep the body hydrated, and their sodium content replenishes the electrolytes lost through sweating.

Alcoholic drinks, in contrast, can have a severe dehydrating effect. By impairing the body’s diuretic hormones, alcoholic beverages increase urination and decrease its rate of retention of necessary liquids. If attendants are going to drink alcohol during the festival, it’s important to alternate consumption with non-alcoholic beverages. In this way, they will be able to replace the hydrating liquids that alcohol will encourage their bodies to expel.

Festivalgoers should be aware that although all of these tips can help them hydrate during ACL, drinking water is ultimately the easiest way to stay hydrated throughout the event. Water is free, readily available and incredibly effective for keeping the body hydrated.