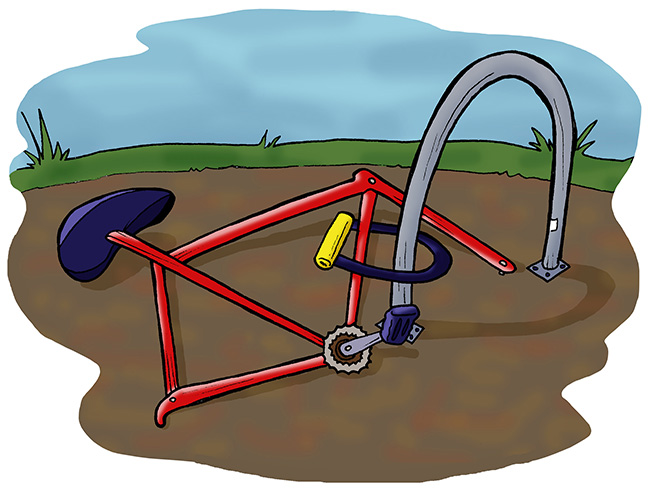 For thousands of students on campus, biking to class makes a great deal of sense. However, the choices that students make to protect their bicycles do not. Short-sighted locking and registration practices are making bicycle theft easier and acting on it more difficult.

Early indications show recent improvement. University of Texas Police Depertment numbers show thefts have fallen from 161 in 2012 to 114 in 2014. Austin Police Department data on West and North Campus pushes this total to roughly 230 for the year.

UTPD credits its “bait bike” program, which has been in operation since 2011, for causing some of this decline, however, its effectiveness has been called into question. Other indicators suggest the decline may be overstated and that actual theft is still much higher.

Campus bicycle registration has significantly declined over the past two years, which means fewer students have had the resources to effectively report theft. A student who does not register their bicycle is unlikely to have their bike’s serial number on hand. Without a serial number, police can do little about a theft, and students see little incentive to report.

Even in cases where bikes are registered, recovery rates are abysmal. A recent study from McGill University found that 2.4 percent of all stolen bikes are recovered.

These factors make bicycle theft a vastly underreported crime. Surveys of cyclists show that only 56 percent of thefts are reported, whereas analyses of theft pin this number at around 19 percent. These numbers would suggest roughly 400–1200 thefts occurred around campus in 2014. Over time, this quickly adds up. The McGill University study also shows that more than half of all bike owners eventually have a bike stolen.

In order to fix this issue, students need to see registration as a way to protect their bikes. Perhaps even more importantly, they must change how they lock their bikes. UTPD officer William Pieper said in an email that “a bike thief is looking for a bike that is secured with a locking device that can be defeated easily or a bike that is improperly secured with a lock.”

Pieper also said that UTPD does approximately 80 demonstrations a year on how to properly lock up a bike. They recommend U-locks, which the McGill study indicated are 24 times more effective than cable locks.

Among those students at one of those presentations last year was aerospace engineering sophomore Caleb Berthy, who had his bike stolen earlier this semester despite using an inch-thick cable lock. He expected his thicker cable lock to be more effective than the lock UTPD demonstrated breaking.

“[I] found it laying on the ground next to the rack,” Berthy said. “It had been clean cut through like it was nothing.”
In order to turn the tide of bike theft, more students need to understand how theft affects them and begin to make responsible choices about how they lock their bikes. While it may take some extra time and money to properly lock a bike, buying a new bike or having to walk is a much greater loss that no student should accept.