Win or Lose Scenarios for Texas vs. TCU 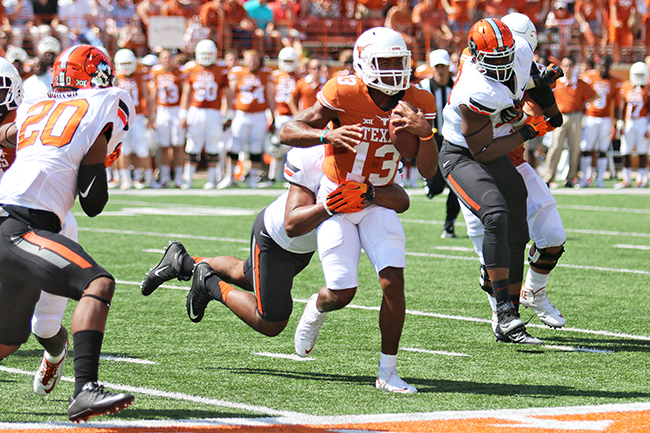 Everything goes well in the kicking game. For the second week in a row, a Texas kicker messed up in a big way. Against California, it was senior kicker Nick Rose’s shanked extra point. Against Oklahoma State, freshman punter Michael Dickson lost control of the snap and shanked the punt. These were only two kicks out of many, but they changed both games. Texas kickers must be on their ‘A’ game against TCU. No shanking, no fumbling snaps, no 20-yard punts and no missed field goals. There seems to be some bad kicking juju for the Longhorns, but maybe it’s just in the confines of Darrell K Royal – Texas Memorial Stadium.

The defense can’t stop Boykin. With a quarterback  like Boykin, the defense needs to be the best it has been all season. Sadly for the Horns, the defense has been the least reliable part of their game, allowing 395 total yards against Oklahoma State. The defensive backs need to stay on the receivers, especially TCU senior receiver Josh Doctson. Doctson had 18 receptions for 267 yards against Texas Tech. The defense must stop the Boykin-to-Doctson connection.

The officiating goes the way it did against Oklahoma State. From phantom holding calls to penalties on players who weren’t even in the game, Saturday was a referee mess. While the refs are completely out of Texas’ control, the Longhorns need things to go their way on the penalty front this weekend. The officiating appeared lopsided in Oklahoma State’s favor, as Texas was penalized 16 times for 128 yards. The Cowboys were penalized seven times for 40 yards. Oklahoma State had more yards from Texas’ penalties than their own rushing game of 103 yards.