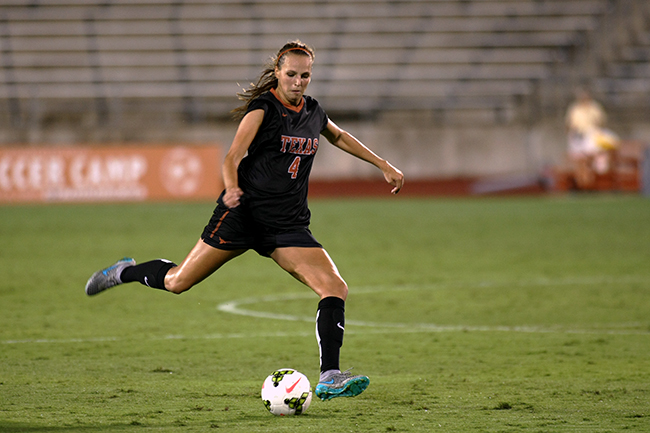 Much of Texas’ match at Kansas was forgettable. The Longhorns and Jayhawks forced just four saves in the game’s first 70 minutes. Then, everything happened at once.

The game was scoreless in the 73rd minute when Kansas junior midfielder Jackie Georgoulis was called for a foul after shoving Texas senior forward Chantale Campbell. Campbell was awarded a free kick and passed the ball out to the right side of the field towards senior defender Ali Schmalz.

Then the referee’s whistle blew. Campbell and Schmalz had run the play prematurely and were forced to do the kick over again.

Luckily for the Longhorns, it was a blessing in disguise.

After showing its hand the first time, Texas ran a different play on the free kick.

Junior midfielder Julia Dyche lined up alongside Campbell this time and approached the ball. But Dyche bluffed taking the kick, and Campbell took the free kick. This time, Campbell kicked it into a mess of Longhorn and Jayhawk players waiting in the box in front of the net. As a swarm of players attempted to head the ball, the ball deflected out to the right of the goal where freshman forward Olivia Brook was waiting to knock in the first Texas goal in three games.

Despite a late goal from Jayhawk freshman forward Grace Hagan, Texas was able to run out the clock for a much needed win and confidence booster.

The win moves the Longhorns to 4-3-3 on the season and ends the Jayhawks’ winning streak at three. The loss drops Kansas to 5-5-1.

Texas will take on unranked Oklahoma State Sunday in the final leg of its three game road trip.