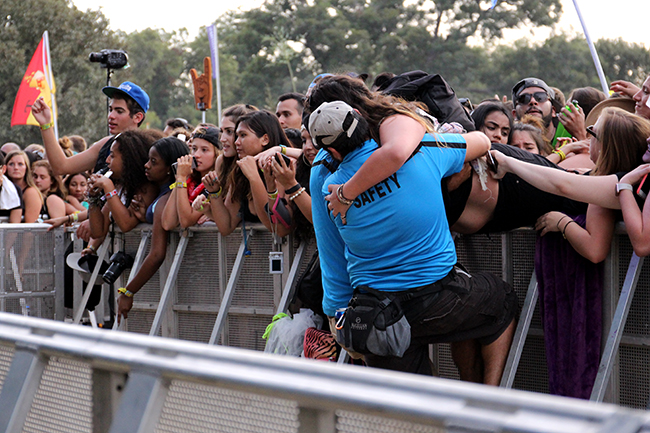 Austin City Limits, like many music festivals, is an exhilarating event for tens of thousands of people — many of whom are students. Although attendees go to enjoy music and hang out with friends, factors such as dehydration, alcohol, illegal drugs and mob mentality present risks students should be aware of.

Temperatures reaching into the 90s make dehydration and corresponding health problems possible for festival attendees. Effects such as decreased sweating and light-headedness occur with dehydration, but severe effects include fainting, kidney failure and even heat stroke, according to the Mayo Clinic.

The hot sun already poses a risk for dehydration, but combining it with alcohol causes a greater risk. Individuals should replace lost fluids with non-alcoholic liquids to prevent dehydration, according to University Health Services health promotion coordinator William Mupo.

“A person drinking alcohol may have to urinate more frequently because of alcohol’s effects on the anti-diuretic hormone,” Mupo said. “Also, students can take an empty water bottle as well as factory sealed water bottles into ACL to help with staying hydrated.”

The illegal drug MDMA, commonly known as ecstasy or molly, can also appear at music festivals because of its mood-lifting effects; however, MDMA increases the risk of heat stroke and electrolyte imbalance among other negative effects.

MDMA initially causes increased energy, euphoria, empathy with others and distortions in sensory perception. The drug can lead to physical consequences such as sharp increases in body temperatures and also liver and kidney damage. Mental and psychological effects include confusion, depression and anxiety after the initial effect of the drug wears off, according to the National Institute on Drug Abuse.

Mob mentality associated with large crowds at ACL also poses a danger. With any large population, many individuals will feel less accountable for their actions due to diffusion of responsibility. This may cause panic and trampling, leading to injury.

Human development and family sciences freshman Jillian Niedermeyer, who attended ACL weekend one, witnessed the danger of mobs at the Sasquatch! Music Festival in May.

“When the show began, people pushed up against the bar,” Niedermeyer said. “People were elbowing us in our faces. One of my good friends started getting really claustrophobic. She started hyperventilating because she was stressed, hot and dehydrated. It was so, so scary.”

Attendees should keep in mind that they aren’t invincible. Guests should stay with friends, hydrate appropriately, take breaks as needed and note the locations of medical tents. That way, guests can enjoy headlining artists such as The Strokes and Florence + The Machine, not heat strokes and respirator machines.