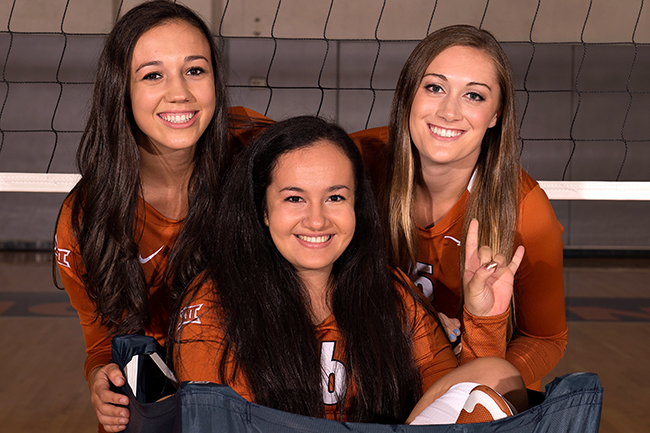 Nothing is static in college athletics. Due to the nature of amateur athletics, students enter and exit programs ever year, hoping to leave a lasting legacy before their careers end.

This year’s seniors will seek to leave a legacy that few will forget. The 2015 season will be another opportunity for seniors Kat Brooks, Molly McCage and Amy Neal to leave their mark on the history of Longhorn volleyball.

Since the beginning of the 2012 season, Texas has boasted a 98-11 record under head coach Jerritt Elliott. In that time, Texas has won three Big 12 titles, three consecutive Final Four appearances and one national championship, which Texas claimed over the Oregon Ducks in straight sets in 2012.

“We came into this program knowing that Jerritt means business,” McCage said. “This teams wins, and every day in practice isn’t just to get better but to beat your opponent.”

McCage and Neal entered Elliott’s program under high expectations. McCage joined Texas after earning 2011 Under Armour High School All-American honors, while Neal came in as the 2011 Gatorade Volleyball Player of the Year.

However, upon entering UT, their careers diverged. McCage started in 26 of Texas’ 30 matches as a freshman, while Neal started in just one match and recorded eleven kills over the course of the season.

While Brooks slightly outpaced Neal’s output in her freshman season — tallying three starts and 112 digs — coaches expected significantly less from her heading into her freshman year. Unlike McCage and Neal, Brooks came to the Texas program largely as an afterthought.

“I kind of approached it as a new slate for me,” Brooks said. “I didn’t really care about high school accomplishments because college is a completely different ballgame.”

Regardless of their respective backgrounds and contributions, Brooks, McCage and Neal ended their freshman year in storybook fashion. Just a few months into their tenure with Texas volleyball, the three were national champions.

“We just kind of came in and won the national championship,” Neal said. “We weren’t in that spring and didn’t know how much work they had put in the offseason before.”

Through their next two years in burnt orange, Brooks, McCage and Neal continued to contribute to a team that reached back-to-back Final Fours, falling in the national semifinals both times. Brooks proved to be a model of consistency for Texas, while McCage and Neal became two of the nation’s top players at their respective positions. Both earned AVCA All-American honors following the 2014 season.

“The benefit they have is that they’ve been to three Final Fours,” Elliott said. “The game doesn’t get too big for them, and it becomes more about who can execute when it counts.”

The current crop of Texas seniors are three of the most decorated athletes in Texas volleyball history. But with one season left to go, Brooks, McCage and Neal aren’t finished yet. With one more chance at another national championship, the three seniors still have work to do.

“Our ultimate goal for this program is always to win a national championship,” Brooks said. “We’re ready to try for another one this year.”