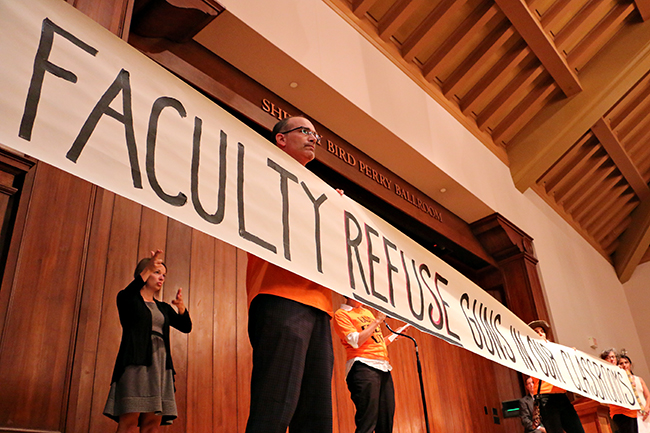 UT held its last public forum Wednesday to discuss how concealed carry on the UT campus will be implemented.

The working group, formed by UT President Gregory Fenves, hosted the forum to collect input from students, faculty, staff and the general public on campus carry. Although only an estimated 150 people attended the second public forum, both sides held strong feelings on the issue of campus carry.

Chuck Hempstead, executive director of the Texas Association of College Teachers, said the University should understand how the faculty feels.

“In my position, we want to protect the faculty and staff at this University by limiting the places where guns can legally be on campus,” Hempstead said. “The faculty needs to be asked about whether they think weapons should be legally allowed in their office or office buildings. ”

Brayden Eychner, military veteran and biology junior, said he supports the passage of Senate Bill 11 but does not have any issues with restrictions the University decides to implement.

“Just as it is my right to choose my teachers on registration day, it should be [the professors’] right to decide what is and is not allowed in their classroom,” Eychner said. “If they choose to restrict it, I will be more than willing to conceal it elsewhere.”

Members of Gun-Free UT, a group of faculty, parents and students opposed to campus carry, had numerous speakers present and a sign reading, “300 UT faculty refuse guns in our classroom.”

Ellen Spiro, a group member and radio-television-film professor, thanked UPTD, which stopped a student from taking her own life in the Student Activity Center last spring. Because it takes a mental toll on students and their families, a conversation about campus carry is important, Spiro said.

“I don’t want to have to stay awake at night feeling what one of those moms is feeling when their child takes their own life,” Spiro said. “I am talking about mental illness and severe depression that hits many students, and we need to keep them safe.”

“Of those nearly 900,000 [license holders], 0.3 percent of them have ever committed any crime,” Grisham said. “By comparison, 2 percent of law enforcement are convicted of any crime. You are 16 to 17 times more likely to see a cop commit a crime than a CHL holder.”

“Had I known this law would have been passed or supported, I would not have enrolled [at UT] altogether,” Lopez said. “Considering UT is full of so many intelligent students who are pressured academically, arming students is the worst idea.”

Xavier Rotnofsky, Student Government President and member of the working group, said Student Government, the Senate of College Councils and the Graduate Student Assembly will hold a discussion on campus carry with students tomorrow evening in the Student Activity Center Ballroom from 5 p.m. to 6:30 p.m. Although he did not speak at the forum, Rotnofsky has previously expressed concerns about campus carry.