Where are they now? Youngest 2015 inductee into Longhorn Women’s Hall of Honor reflects on career 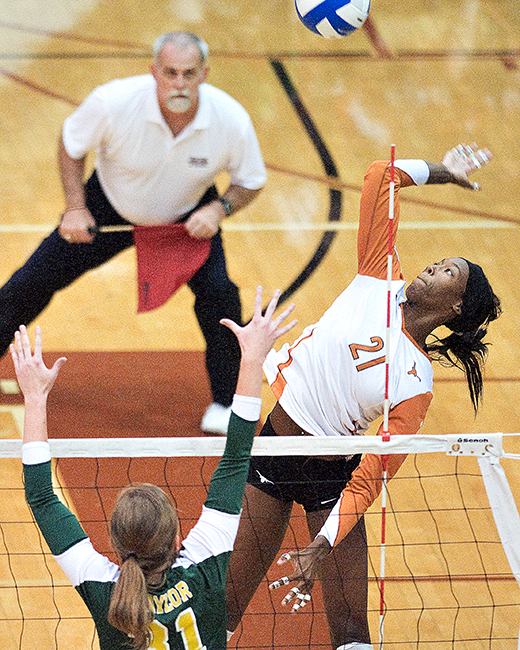 In 2009, Destinee Hooker walked off the court, crushed after losing the NCAA championship — her last game as a Longhorn volleyball player.

No. 2 Texas fell 3-2 by top-ranked Penn State after taking a commanding 2-0 lead. Hooker had registered 38 points and a career-high 34 kills during the game, garnering the Most Outstanding Player recognition. Even so, she couldn’t lift Texas to a national title.

Hooker remembered the game once again Sept. 25, just before she became the youngest inductee of UT’s 2015 Women’s Hall of Honor. Despite thinking about it “every day,” she feels differently about the loss now.

“A blessing is a blessing,” Hooker said at the ceremony. “Hopefully Texas can bring that championship back this year.”

Since her time at Texas, Hooker has been plenty busy. She led the U.S. women’s volleyball team to the final match in the 2012 Olympics, becoming the first Longhorn volleyball player to earn an Olympic medal. Now living in North Carolina, she welcomed her first child in 2013 — a daughter named Keitany — and is expecting a son in March.

But her volleyball career hasn’t stopped. Hooker continues to play overseas, most recently with Tianjin in the Chinese Volleyball League. But she’s honest about the challenges of continuing her career while starting a family.

“It’s hard. I think going to practice and not seeing your kid makes you kind of anxious to get back home,” Hooker said. “But at the same time, you’re there to do a job. You’ve got to focus.”

Hooker’s drive to succeed earned her a nomination into the Women’s Hall of Honor earlier this year. She said when she received the news, she felt more than just appreciation.

“I was kind of shocked. For one I felt bad — I didn’t even know what this was about, so I had to do my research,” Hooker said. “It’s a huge honor. It really is.”

Hooker’s list of accomplishments at UT is extensive. She is one of three players in Texas volleyball history to earn four All-American honors and compete as an All-American in track. She won four NCAA titles in the high jump and was named the Big 12 Female Athlete of the Year following the 2009 NCAA championship game.

Despite these feats, Hooker said it was surreal to be among the other Women’s Hall of Honor inductees and hear them say they used to watch her while she played for UT.

“You see all the legends before you and [get] to interact with them around here,” Hooker said. “I’m so glad to be here.”

Hooker watched the volleyball team take on TCU while she was in Austin for the ceremony and remains proud of the program throughout her professional career. She said stepping back on the court flooded her head with memories.