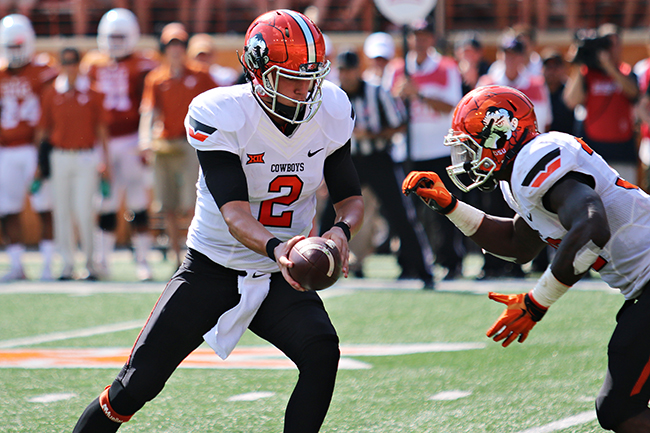 The Big 12 acknowledged Sunday that the officiating crew and chain crew made an error during the game between Kansas State and Oklahoma State on Saturday.
With time running down in the first half, the Cowboys earned a first down at the Kansas State 45-yard line. On first down, however, they were flagged for holding. As the penalty was marked off, the chains were mistakenly pulled back five yards. Two plays later, Oklahoma State gained 19 yards to the Wildcats’ 39-yard mark, where it should have been fourth-and-4 — but with the chains incorrectly set, the Cowboys were given a first down.
Oklahoma State went on to score a touchdown to close the deficit to 28-20 and beat Kansas State 36-34 on a last-second field goal.
“Accuracy and adherence to conference policies and officiating mechanics are vital to the proper administration of the rules in all games,” said Big 12 Conference supervisor of officials Walt Anderson.

One week after flagging Texas 16 times, referee Alan Eck and his crew were at it again during Oklahoma’s game against West Virginia on Saturday. The Sooners and Mountaineers combined for 23 penalties and 245 yards during Oklahoma’s 44-24 win. Eck and crew threw even more flags this time around, with Oklahoma taking 12 penalties and West Virginia taking the remaining 11. Of note among the flags, however, was an illegal wedge call on Oklahoma on a kickoff in the third quarter. The call, which prohibits two or more players lining up shoulder-to-shoulder to block on a kickoff, is a rarely made call. Still, Sooners head coach Bob Stoops wasn’t worried about the number of flags from Eck’s goal.

“I wouldn’t say I’ve been particularly aware of this group throws more than this group,” Stoops said. “I’ve never felt that way.”

After beating West Virginia on Saturday, two Oklahoma players were tabbed to the Big 12 weekly awards Monday. Senior linebacker Eric Striker and freshman kicker Austin Seibert were named as Defensive and Special Teams Players of the Week, respectively. Striker tallied 12 tackles — including three tackles for loss — and two sacks and forced a fumble in the 44-21 win. Seibert was perfect on all three of his field goal attempts, including two from 40 or more yards.
TCU freshman receiver KaVontae Turpin and Oklahoma State sophomore quarterback Mason Rudolph split the Offensive Player of the Week award. Turpin recorded six catches for 138 yards and four touchdowns in the blowout win over Texas, while Rudolph went 34-for-55 with 437 yards and three touchdowns in the Cowboys’ come-from-behind win over Kansas State.

After getting passed up by SEC and Big Ten teams the past couple of weeks, TCU and Baylor finally made their moves to the top following big wins over the weekend. The Horned Frogs moved to No. 2 — where they started the season ­— after beating Texas 50-7. Baylor jumped to No. 3 after beating Texas Tech 63-35.
Oklahoma moved up to No. 10 after its win at home against West Virginia. In-state rival Oklahoma State actually dropped a spot to No. 21 after its late-game win over Kansas State.
West Virginia, Kansas State and Texas Tech each received votes.