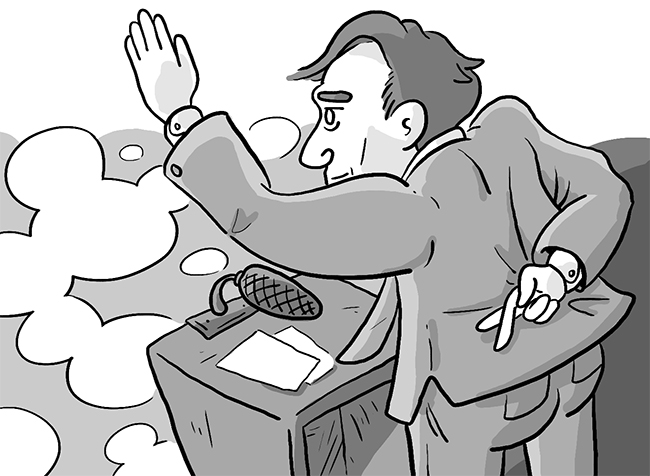 In the most recent Republican presidential debate, former Hewlett-Packard CEO Carly Fiorina, by most measures, did well. She answered lots of questions, battled head-to-head with Donald Trump and even made an emotional plea about a charged issue. Unfortunately, in that last case, she relied on prevarication to make that plea, regarding supposed videos that she said showed Planned Parenthood murdering babies immediately after birth.

“Watch a fully formed fetus on the table, its heart beating, its legs kicking, while someone says, ‘We have to keep it alive to harvest its brain,’” Fiorina said during the debate.

It’s a horrifying image. Fiorina challenged President Barack Obama and former Secretary of State Hillary Clinton to watch the video. The problem is that the video she describes doesn’t exist. She makes those details up. Fact-checkers were quick to jump on her mendaciousness, but other parts of the media were comparably feckless. If she would have said Trump had ordered the murder of Jimmy Hoffa, there would have been just as much truth in the assertion.

Closer to home, the same reliance on lies has permeated the referendum election over the Houston Equal Rights Ordinance (HERO). It codifies existing protections — such as on the basis of race or religion — into local law, and it also extends protections to the LGBT population. Given that neither the state of Texas nor the federal government does this, this is where the controversy lies.

Ben Hall, a former Houston city attorney and a current mayoral candidate, has largely focused his campaign on pushing a pernicious myth intended to stir up fears about HERO — that the law will allow men to go into women’s restrooms.

“It’s a dangerous ordinance that will allow you, me or anyone else, to self-identify themselves as a female at any time and walk into a ladies bathroom or locker room, and it’s just the wrong drafting of the ordinance,” Hall said in a recent interview.

Supposedly, this is due to the law’s protections of transgender individuals. But the law contains absolutely no wording regarding restrooms. Hall — and HERO’s other detractors — simply lie when they continue pushing this harmful talking point.

“The bathroom myth is not based in fact, and there have not been any recorded incidents to the contrary in any of the 200-plus American and Texas cities with these protections in place,” said Maverick Welsh, the president of the Houston LGBT Caucus. “Our opponents are lying to voters in the hopes that they will buy their BS that this local remedy for discrimination will somehow harm people.”

Similarly, the media is going along for the ride without asking the right questions often enough. The local Fox affiliate in Houston has been especially bad about repeating whatever candidates say without any verification. If a candidate for mayor had alleged Trump had murdered Jimmy Hoffa, every quote would be appended with a mandatory editor’s note that acknowledges the pontification is not grounded in reality. At a certain level, those pushing these myths should be treated the same.

The press is supposed to serve as a watchdog for the public, which ensures a fair account of the truth is presented. Lying isn’t fair for anyone.