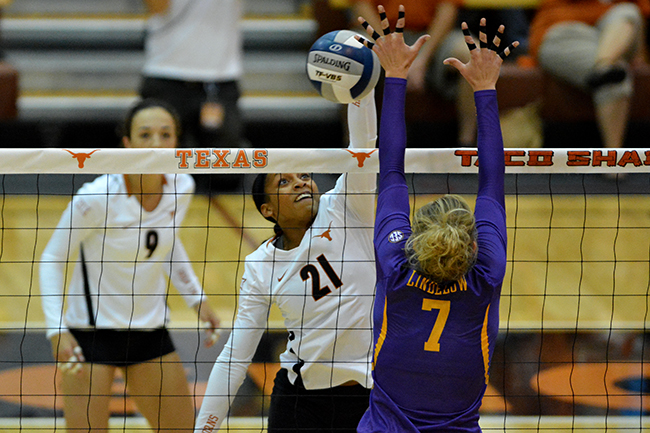 No. 2 Texas will hit the road again Wednesday to face unranked Baylor in a Big 12 Conference matchup.

“They have a lot of strong seniors and great defense,” McCage said. “They’ve improved, [and] I’m excited to play someone who can put up a good block and good defense against us.”

The Longhorns will try to counter the Bears defense with their ok hitters. McCage, senior outside hitter Amy Neal, junior middle blocker Chiaka Ogbogu and freshman outside hitter Yaasmeen Bedart-Ghani have all been swinging well and will play key roles in the match.

“We’re pretty efficient,” head coach Jerritt Elliott said. “We have so many different weapons, we can open up some holes in their block and be able to score at an efficient rate.”

Bedart-Ghani earned Co-Big 12 Rookie of the Week honors this week for her performance in Texas’ sweeps over West Virginia and Iowa State. In both games she notched a career-high seven kills, bringing her season total to 26 with a .349 hitting percentage. Neal leads the Longhorns with 192 kills, followed by Ogbogu’s 136 and McCage’s 106.

Baylor has a strong attack of its own. Sophomore outside hitter Katie Staiger leads the Bears with 177 kills, followed closely by freshman middle blocker Shelly Fanning’s 174 and senior outside hitter Andie Malloy’s 144.

Despite Baylor’s losing conference record, this match will prove tough for the Longhorns. The Bears are currently 7-0 at home and boast an experienced roster. Texas, however, is playing some of its best volleyball of the season and holds a 75-2 all-time series record over Baylor.

“[The Longhorns] have a good demeanor about them right now,” Elliott said. “Now we have to go on the road at Baylor, which has never been easy for us. We’ll take it one match at a time.”