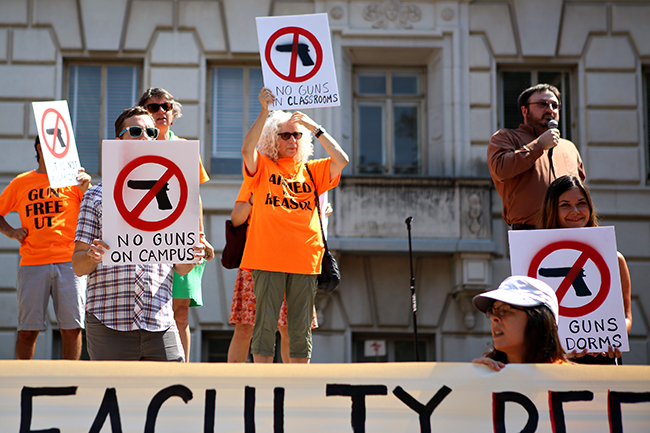 Senate Bill 11, better known as the “campus carry” bill, passed the Texas Legislature at the last second; 15 minutes longer on the House floor and it would have failed.  Even though the version that passed is better than the original bill, it fundamentally changes our campus atmosphere.

Classrooms are sacred, we told the Legislature, and knowing that anyone in the room could be armed fundamentally alters that environment. Ideas, thoughts and debate won’t flow more freely because SB 11 passed. SB 11 does not solve even one targeted problem — it creates new ones. And now students, faculty, and staff are struggling with what this means for our campus. It is time for us to decipher the bill’s legislative intent and balance that with legitimate campus safety concerns when developing and implementing UT’s policy determining where CHL holders can carry guns on campus. Do we want guns in our dorms? Do we want guns in our labs? Do we want guns in our libraries?

Stakeholders on college campuses across the state overwhelmingly opposed this bill last year as it worked its way through the Legislature. Chancellor McRaven, former Chancellor Cigarroa, student governments from all over the state, and faculty across all disciplines opposed allowing guns in campus buildings. Even the Texas Association of College and University Police Administrators, charged with keeping us safe, opposed campus carry. The Legislature didn’t listen.

If the shooting last week in Oregon taught us anything, it is that campus carry is indicative of a larger problem: the culture of gun violence that plagues the United States. No one should need a gun on their campus to feel safe.  There were 45 school shootings in the United States in the first 9 months of 2015, including the tragedy in Roseburg, and we still have three more months to go.  Last week, an Australian newspaper quipped, “The [U.S.] is too immature a society to be allowed to play with guns. It has never shed its Wild West mythology.” Out of the top industrial nations in the world, the U.S. has by far the highest incidents of gun violence.

The Legislature granted an opt out only to private universities, but not to us.  But we do get a say in how our policy is implemented and have an opportunity to craft a policy that reflects the priorities of our University. We wish this law was never passed, or that public universities were at least allowed the same privilege as private schools to determine how best to keep our campus safe.

Advocate. Rally. Support. Students and staff, tell the Working Group that you want the strictest restrictions possible. Professors, write on your syllabus that you prefer that students leave their guns at home.  Remember that the united voices of students, faculty, and administrators saved us from a more permissive and sweeping bill, and now it is time to make sure that this bad policy is implemented as responsibly as possible.

Pahl is a Middle Eastern studies and Russian studies senior from Portland, Oregon. She is the community director for University Democrats. Follow her on Twitter @jordanpahl.