Longhorns look for revenge against Oklahoma 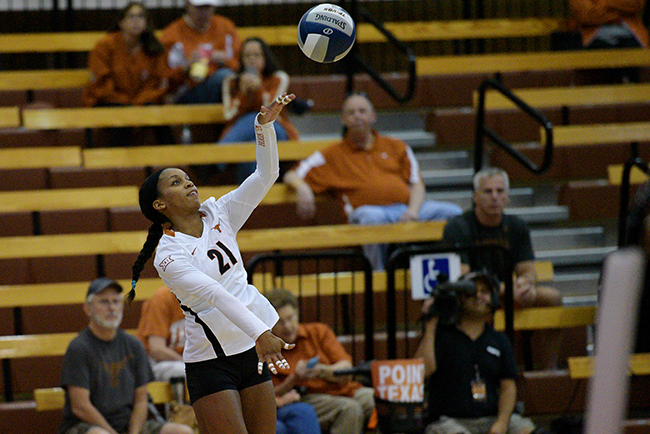 While most will tune in to the gridiron rivalry at the Cotton Bowl this weekend, Texas will compete in another rivalry matchup at Gregory Gym. Sunday, No. 2 Texas squares off against unranked Oklahoma.

The Longhorns enter the match as heavy favorites over the Sooners. Texas has won its last 10 matches, the most recent four against Big 12 opponents. But despite the recent success, head coach Jerritt Elliott won’t allow his Longhorns to take Oklahoma lightly.

“They tend to play us really tough,” Elliott said. “They’re very good defensively and when we play, nothing is easy. We’re going to try and keep doing what we’re doing and improve our record in Big 12 play.”

Despite boasting a 7-8 record on the year, the Sooners’ performance against Texas in 2014 gives more than enough reason to worry Elliott and his squad. Texas eked out a five-set win against Oklahoma in November 2014 after falling to the Sooners in October earlier that season. The loss, in straight sets, came before a record crowd of 4,402.

“It’s a wake-up call,” junior setter Chloe Collins said after the loss. “We need perspective that every team is going to play their best and we need to be ready. As a team, we just need to get back in practice and prepare.”

The Longhorns have been playing their best volleyball of the season recently, but Oklahoma presents a whole new set of challenges to the Texas squad. Texas tips off against Oklahoma at 1 p.m. Sunday.