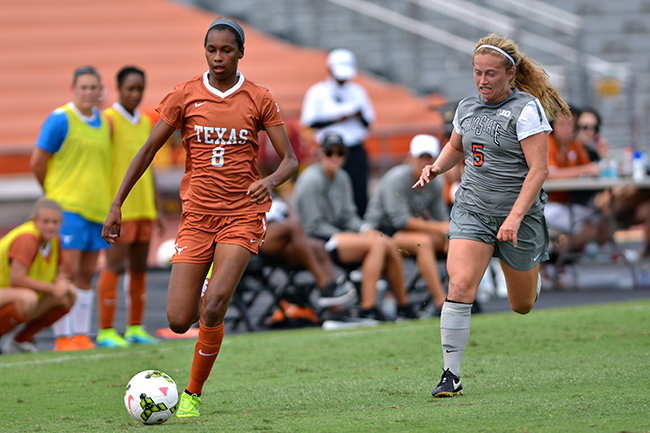 The time  hit 0:00 Friday night, and junior goalkeeper Cara Connatser jogged onto the pitch and made a beeline for freshman forward Alexa Adams.

Connatser didn’t just hug the Adams — she lifted her off the ground.

But Texas couldn’t put one in the back of the net, and the game was tied at intermission.

The Longhorns’ attack continued in the second half. They created opportunity after opportunity, with shot after shot, but none went in.

In the 60th minute, Flores fired a shot off the crossbar, and it landed at Adams’ feet. She fired a fastball to give the Longhorns a 1-0 lead.

It looked as if Texas was in another  home match where it would play 110 minutes instead of the allotted 90. It looked as if it would be another game in which the Longhorns would settle for a tie when they could have won the game.

But in the 79th minute, Smith’s goal kick traveled past midfield — like most of them do. The ball found a Texas player, and then senior forward Kelsey Shimmick head it to Adams, who fired the ball from 24 yards away.

The ball sailed over sophomore goalkeeper Lindsey Hendon and dipped under the crossbar. Adams’ second goal, the game-winner in a 2-1 Texas victory, sealed Texas fifth win of the season.

“Great job Lex, you saved us,” Flores told Adams after the game. “You deserve those two goals.”

It was a breakout performance,  but Flores said she  didn’t think it would be a one-time thing.

“I could see Alexa performing like that anytime,” Flores said. “She’s a great player. She’s a great part of the youth of on our team, and those are well-deserved goals.”

“That's what she expects of herself,” head coach Angela Kelly said.

That's what Kelly and her teammates expect from her, too.