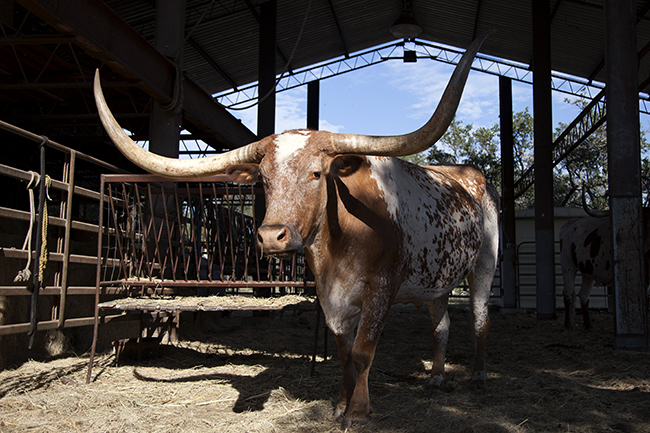 This story has been updated throughout since its original publication.

After more than 11 years and 147 games, Bevo XIV’s run as the Texas mascot has come to a close. Bevo retired Tuesday after being diagnosed with Bovine Leukemia Virus, which caused him to miss Texas’ 24-17 victory against Oklahoma on Saturday.

Rumors surrounding Bevo’s retirement began early last week, as he was preliminarily diagnosed with cancer. Various Texas doctors examined him, including his longtime veterinarian Dr. John Tarlton, eventually confirming the diagnosis. They decided that it was in Bevo’s best interest to retire.

“Wishing @BEVO_XIV a happy and restful retirement on his ranch after bringing so much goodwill and pride to @UTAustin,” UT President Gregory Fenves tweeted Tuesday.

Bevo will reside on a ranch owned by his caretakers John T. and Betty Baker, who act as his sole owners. The Bakers donated him to the University for games and special events.

Before he became known to the Longhorns community as Bevo, the Bakers called the steer by his original name, Sunrise Studly. As Sunrise, Bevo was a champion steer, earning the title of National Grand Champion from the Texas Longhorn Breeders Association of America in 2004.

“He was just a 2-year-old when he became Bevo,” Betty said in an interview with The Daily Texan in 2013. “That’s why I call him Baby. But at first, we didn’t think he was anything special. I never saw a Bevo in him, but after he was halter-broken, he just kept getting better and better.”

Bevo XIV’s career was full of memorable moments as a Longhorn, including Texas’ 2005 National Championship over the USC Trojans and President George W. Bush’s second inauguration. In addition to appearing at Texas football games, Bevo XIV went to numerous charity events and private parties in the Austin area. The event proceeds benefited the Neighborhood Longhorns Program, designed to help local students via mentoring and tutoring.

Ricky Brennes, executive director of the Silver Spurs, said in a press release that Bevo XIV was “a special animal.”

“He truly embraced his role and loved engaging with people at games and special events,” Brennes said. “At his ranch — where he will continue to live — he was clearly the leader of the herd.”

During his tenure, Bevo XIV was most famously seen sitting in the south end zone of Darrell K Royal-Texas Memorial Stadium, serving as a permanent fixture for Longhorn football. In his time as mascot, Bevo XIV saw two head coaches, seven starting quarterbacks and a string of tumultuous seasons dating back to the Longhorns’ 5-7 2010 season. But despite the team’s struggles, Bevo XIV was always there to represent Texas pride.

“He’s a living symbol of the University of Texas,” Brennes said in an interview with The Daily Texan in 2013.

With Bevo XIV now comfortably on the Bakers’ ranch, the search for Bevo XV will begin as soon as possible. The Silver Spurs Alumni Association will lead the search, aiming to debut a new Bevo by the opening of the 2016 football season, coinciding with the 100th anniversary of Bevo I’s first appearance at a Texas football game.

For more on the life of Bevo XIV, check out our feature story from 2013.