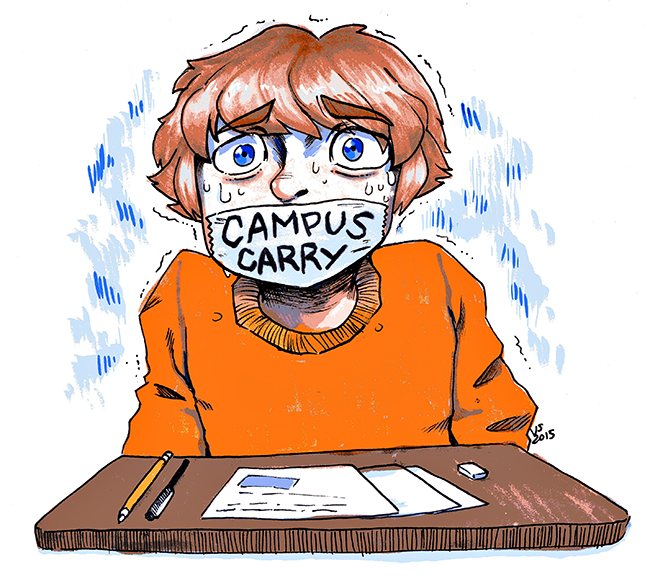 Many argue that gun culture in America dates all the way back to the country’s colonial beginnings. After all, in the 18th century, it was the American Long Rifle that helped us fend off the British in the Revolutionary War. The Spencer Repeating Rifle was used by the Union in the Civil War. Former U.S. President Teddy Roosevelt was seen donning the famous Winchester Rifle in many of his portraits.

The prevalence of guns both now and in the past has created an idea that those with the guns have the power, and the objective of SB 11 is to put the power back into the hands of the students. It’s a win-win for everyone, right?

Just because a Senate bill makes it legal to carry guns around campus doesn’t necessarily mean that everyone will. In fact, many of them can’t — not because of legal issues, but because of financial issues.

Guns aren’t cheap. Buying a gun typically costs around $500, a price not everyone can afford. In addition to buying guns, Concealed Handgun Licenses cost about $140. This means not everyone will be able to own a gun, and the ones who will often will come from a background of means.

This isn’t just a hypothetical scenario. In a study by the College of Williams and Mary, only 32 percent of people in Colonial America from poorer backgrounds owned guns, while 70 percent of individuals from richer backgrounds owned guns. Power in itself derives from the idea of control, and so long as guns can control people, the rich are the only ones who have power.

How does this affect life on campus, though? In a world where guns are power, students without guns find themselves in a situation where they are defenseless and powerless. In fear of getting shot or a gun pulled on them, students without guns may not voice their opinions against someone who may have a gun — essentially limiting their First Amendment rights.

At UT-Austin, a school with 45 percent white students and only 4 percent black students, more probable than not, guns are going to be in the hands of white students, and racial division will be perpetuated.

The foundation of our entire country predicates on this notion that all men are created equal. So long as these systemic biases exist, we’re not doing justice to the ideals we embody.