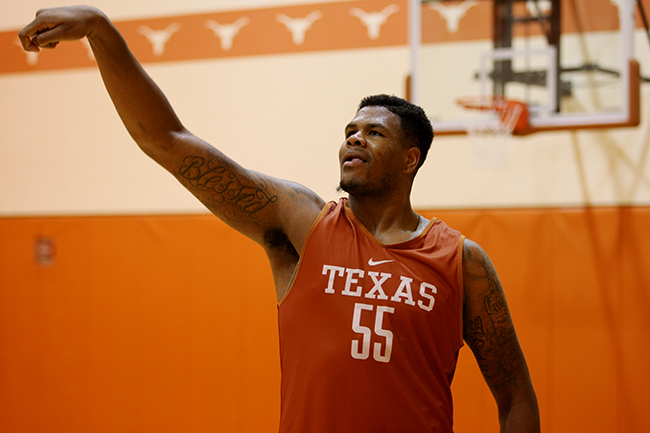 With just a month left until the season starts, men’s basketball head coach Shaka Smart addressed the media following Tuesday’s practice. Here are five takeaways from his first comments of the season:

1. Energy and chemistry: In the 20 minutes of practice open to the media, the Longhorn practice was incredibly loud and energetic. Players celebrated a regular jump shot like it was a game winner with chest bumps and high fives. As play picked up, the entire team seemed close-knit and energetic.

2. Up-tempo style: Smart’s offense will revolve around ball movement and a fast pace. Some of the drills prompted two or three quick passes before taking a shot.

“The practice pace is getting to the point where we want it to be,” Smart said. “It’s not all the way there yet, but I think we’ve made some strides.”

3. Bigs: Smart stressed how important the big men are to the team. Senior center Cameron Ridley returns to the front-court rotation, and junior forward Shaquille Cleare is eligible after sitting out last year due to NCAA transfer rules. Ridley looked slimmer and showed off touch from the outside in drills, while Smart wants Cleare to provide nastiness and edge.

4. Freshmen: Smart divided the team by class late in practice and spent the entire session with the three freshmen: guard/forward Tevin Mack, guard Eric Davis, Jr. and guard Kerwin Roach, Jr. The three have the potential to contribute early, and Smart spoke positively of their potential.

“I’m not saying any one of them is going to set the world on fire as a freshman,” Smart said. “But I think they all can help us this year in games.”

5. Work in progress: Despite the excitement and energy around the program, Smart said there is still work to do before the season opens. After the team scrimmages at Gregory Gym next Wednesday, it will face Tarleton State in an exhibition game on Nov. 6. Acclimating players to the system and setting a rotation are key as the start of the season approaches.

“I don’t know what our starting lineup would be,” Smart said. “I think we have a lot of guys that can contribute. The difference is when the lights go on in a real game, how the different guys respond.”