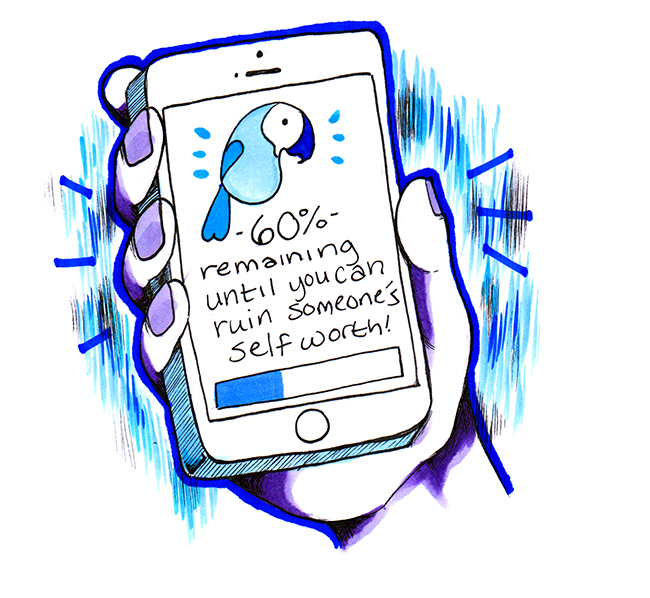 Imagine you are at a restaurant, waiting for your date — who was supposed to meet you 30 minutes ago — to arrive. Disappointed that the guy who you thought you had a connection with last week has apparently stood you up, you open up your Peeple app to check your profile. You see a negative comment has been sent to your inbox, and your heart sinks. The guy you were supposed to meet has attempted to post a negative comment about you, saying you “were too obsessive” and “talked about your cats too much.”

Unfortunately, this concept could become reality in November when the app “Peeple” is launched. The app — essentially a “Yelp for people” — will allow users to rate anybody they know on a scale of one to five, as long as the person writing the review is over 21 and can prove identity with a Facebook account. While there is no stopping the launch of the app, the general public needs to understand the detrimental effects of such a concept. Peeple can ruin self esteem and even lives.

The app will be coded for Androids and iPhones, making it accessible to nearly 53 percent of all cell phone users. The app is worth $7.6 million and has already been revised in response to negative feedback. The companies funding the app are out of touch with people. In no way is this a good idea, and there are not any justifiable reasons to fund such a concept.

In an interview with Newsweek, the app founder Julia Cordray said Peeple is  “all about uplifting each other and helping each other and operating from positivity.” Originally, the app allowed negative comments on people’s profiles even if libelous or untrue. However, Cordray recently modified the app to send negative comments directly to the person being reviewed, giving them 48 hours to settle differences between the reviewer and the reviewee. If the person being reviewed does not have a personal profile on the app, negative comments are not posted.

Despite these “revisions,” there is still a troubling basis to the app. Someone’s personality is ultimately one of the most complex compositions in which it is unfair and absurd to assign a number.

Jeff Linwood, journalism lecturer and mobile app developer, said he thinks it is up to the users of the app to avoid these abuses of the service offered.

“An endorsement service isn’t necessarily a bad thing — many people ask for positive, career-oriented endorsements on the LinkedIn service,” Linwood said. “The difference is that those endorsements come from an identifiable user, so if someone is abusing the system, their profile is tied to those actions.”

Wenhong Chen, an RTF and sociology assistant professor, said she is afraid people will endorse the abuse Linwood noted, and said she is confused by how the changes to Peeple will promote positivity. Chen said, for her, the app carries implications of violation of privacy, and she fears it will put “minorities, like women, in a very vulnerable position.”

Despite modifications, the concept of rating human beings is still a troubling one. It is important for those who post a review to be in touch with humanity and realize that not all things can be assigned a numerical value — especially a human being.