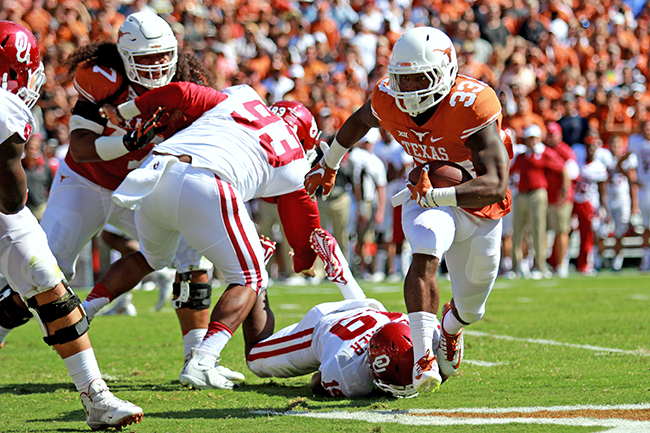 Texas historically excels at running the ball. All-time rushing greats like Earl Campbell and Ricky Williams ran out of the stadium’s tunnel. More recently, stars like Jamaal Charles and Cedric Benson have led the team to success.

Last season, Texas’ run production dropped. The team averaged just 3.8 yards per carry — ranking No. 94 nationally — which prompted head coach Charlie Strong to change the offensive scheme. After moving to a spread offense this season, the Longhorns once again excel in the run game.

This year, Texas leads the Big 12 in rushing attempts and ranks in the top 45 in rushing yards. In the last two weeks, the Longhorns rank No. 14 nationally on the ground. Additionally, Texas has already rushed for 100-yards in six games.

The Longhorns play their best when they run the ball early and often. In wins against Rice and No. 19 Oklahoma, Texas rushed on at least 73 percent of its plays. In both of those wins, the team gained over five yards per rush and scored at least one rushing touchdown. Additionally, in an explosive 44-point performance against California, the Longhorns averaged over five yards per carry and scored six rushing touchdowns.

The team’s running backs provide a unique spark in a pass-heavy conference. Senior running back Johnathan Gray can make defenders miss with his shifty running style. Additionally, sophomore running back D’Onta Foreman consistently churns out hard-fought yards with his power. He’s racking up an outstanding 6.2 yards per carry on the season and has run for 100 yards in both of his last two games.

But redshirt freshman quarterback Jerrod Heard remains the Longhorns’ greatest rushing asset. Heard is averaging 4.9 yards per carry this season — No. 6 among quarterbacks in yards per game. In Texas’ four highest scoring performances, Heard ran on at least 30 percent of the teams’ rushing attempts.

There’s no question that the Longhorns have the talent to run the ball. Texas’ success on the ground now relies on playcalling and execution. The 2-4 start isn’t what the Horns hoped for. But the team is finding its identity pounding the ball.