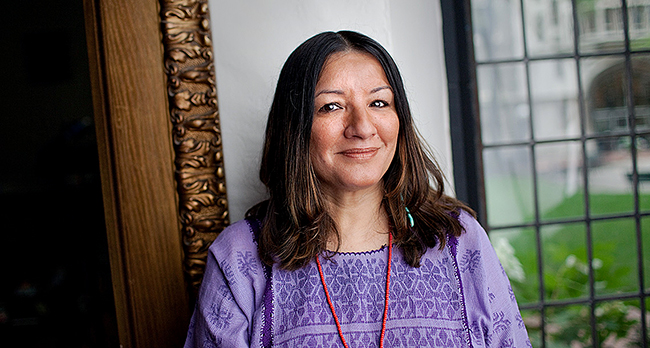 Editor’s Note: This Q&A has been edited for brevity and clarity.

Author Sandra Cisneros spent her childhood traveling between the U.S. and Mexico, embracing her dual identities by writing about them. Her novels, including her most famous book, “The House on Mango Street,” center around characters based on her neighborhood and are framed by themes of home, identity and belonging. This year, the MacArthur Fellowship recipient released “A House of My Own: Stories From My Life” — an autobiographical novel that focuses on her home and the events that followed after she left it. The Daily Texan spoke with Cisneros about her latest book and her experiences as a Latina writer.

The Daily Texan: Do you remember the moment you first knew you wanted to be a writer?

Sandra Cisneros: Oh yes. When I was 11 years old in the Humboldt Park Library. I just wanted my name on the spine of a book. I know that sounds so silly and superficial, but I wanted some kind of permanence. My brothers would always tease me about how I was going to grow up and get married and change my name. They’d say I wasn’t a real Cisneros, but I wanted to show everybody.

DT: How does your latest book differ from your past work?

SC: My other stories were loosely based on my neighborhood. [“A House of My Own”] is my life, it’s much different than that. I try to set the record straight. It’s really peeling the layers back so you can see who the woman behind the story is. I hope it gives people some clarity, I try to be very precise.

DT: Part of your most recent book discusses you leaving your parents’ home. Do you think your life would have been different if you hadn’t decided to do that?

SC: I probably would’ve had a different life. I wouldn’t have been able to reinvent myself with my family around, I would’ve been locked into the life that they expected of me. It was incredibly hard, though. I was my father’s favorite child, just imagine. It broke my heart to break his heart when I left.

DT: How has your identity as a Latina shaped you as a writer?

SC: I think a lot of Latino writers tend to focus a lot on identity. As the child of an immigrant father and a Mexican-American mother, you always feel a little bit displaced, ignored, slighted and vilified. In history, you’re not included in an admirable and loving way so you’re always questioning where you belong. You’re in the leftovers of the city, you look around and think that this can’t possibly be your home because you’re never made to feel at home.

DT: What inspired you to write “House On Mango Street?”

SC: When I wrote that book, I wrote it to survive. I wrote it as I was writing my poetry thesis. I was almost at the end of my education, and I wanted to go home crying and quit. I got angry and I decided to write the story I never had. I wrote the story that I didn’t get in my lifetime.

DT: How has your writing helped you through the more difficult times in your life?

SC: “Caramelo,” the big ten-year novel, came at a time of so much loss in my life. There was a lot of death, a lot of betrayal, a lot of people leaving me, and that book was my life raft. The times in my life when I wasn’t writing were when I became depressed and suicidal. It keeps me sane.