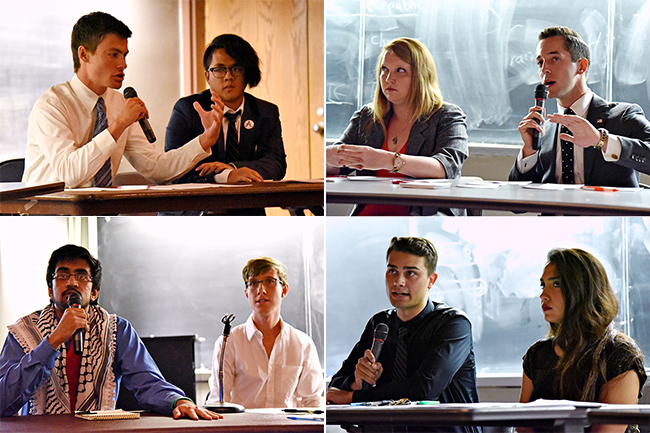 This week, the Daily Texan Forum will showcase contributions from various students who are working to engage students in the 2016 election. Although we are more than a year away from Election Day, the first caucuses and primaries will begin shortly after the New Year. Soon, students will soon find themselves casting ballots in the Democratic and Republican primaries in Texas, which occur on Super Tuesday, March 1, 2016.

And the election is beginning to heat up in earnest. The first Democratic presidential debate occurred Tuesday night, while the Republican field has already gone through two debates, with a third planned for late October.

While there may be a disconnect between campus and the debate stage, there are several groups of students working to get Longhorns engaged in the process. Among them is John Falke, a university-wide representative, who hosted and moderated an on-campus debate between various student groups, including University Democrats, College Republicans, Young Americans for Liberty and the International Socialist Organization. Also featured on our page is Sasha Parsons, the Student Government civic engagement policy director, who oversees Hook the Vote, SG’s voter registration initiative. Finally, Ashley Alcantara, the communications director for University Democrats, will be writing about her organization’s goals and strategy relating to campus engagement in the 2016 election.

Thursday morning at 11 a.m., we will have an in-person discussion about this crucial issue, in the Texas Union Sinclair Suite. I encourage you all to come out to hear more about what these students have planned as a crucially important election begins to take shape.

Fountain is a government senior from Pelham, New York.