Biggest thing holding Ben Carson back is his mouth 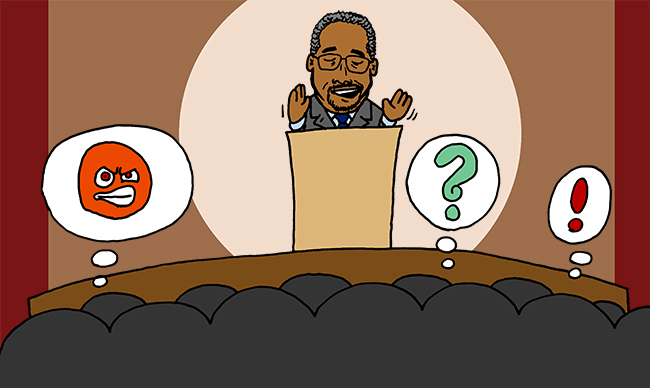 Dr. Ben Carson can’t seem to say the right thing. The retired neurosurgeon and Republican presidential candidate has spent the past few weeks in the spotlight, not for his quiet rise in the polls, but for his comments on gun control.

Carson’s terrible, horrible, no good, very bad week began when he said gun control “doesn’t work for crazies.” Referring to the mentally ill as “crazy” was downright insensitive to the 43.8 million Americans who suffer from some type of mental illness each year. Additionally, Carson wrongly tried to connect gun violence with mental illness when in reality the vast majority of mentally ill Americans never show any signs of violence.

To seem knowledgeable about gun violence, Carson conveniently recalled a story about the time he was held at gunpoint. When a man placed a gun against his ribs, he claims he calmly told the gunman, “I believe that you want the guy behind the counter.” Ironically, just days earlier Carson advocated for the American people to attack an active shooter if they were in a similar situation. If Carson himself could not even follow his own advice in a time of panic, how can he expect Americans to do the same?

His most outrageous comment came when Carson argued that if the Jews had guns, the Holocaust could have been prevented. Many historians agree that no amount of guns could have stopped the wave of anti-Semitism in Nazi Germany that ultimately led to the Holocaust. Carson, who lacks a history degree, cherry-picked his research, choosing to cite a 1938 German law that disarmed the Jews but forgetting about a 1919 law that disarmed the entire nation.

Presidential candidates, and even the president himself, are known for making gaffes from time to time. In fact, messing up makes the candidates much more relatable. But Carson isn’t just misspeaking every once in awhile. He’s consistently speaking with no filter and with ineffective research to back up his claims. Should he be elected, Carson’s lack of restraint would only further weaken the respect that the office of the presidency deserves.

Voters expect this kind of political stunt from businessman and entertainer Donald Trump. But unlike Trump, Carson has the potential to become a serious contender for the White House. The biggest thing holding him back right now is his mouth.