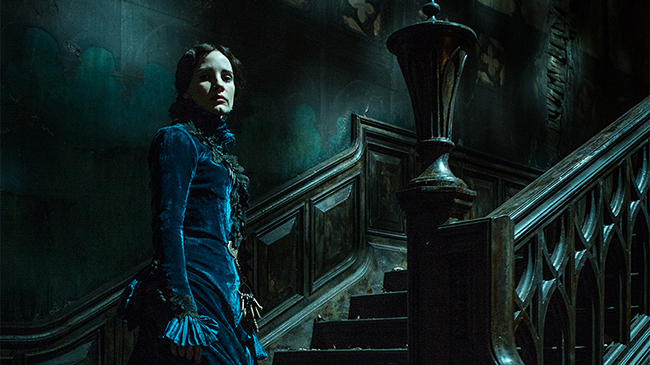 For mothers beyond the grave in “Crimson Peak,” this mantra still applies. Young Edith Cushing (Mia Wasikowska) receives a visit from her mother’s ghost during a stormy night. The ghost, black and vaporous, delivers a message — “beware of Crimson Peak.” But Edith doesn’t understand its meaning, and she’s more afraid of her mother than this supposed peak.

To anyone watching the events unfold on screen, the computer-generated ghost is not all that scary. It doesn’t blend well with the physical setting it inhabits, and because it doesn’t look like it’s actually there, it doesn’t feel like much of a threat.

This is a problem throughout much of the movie, co-written and directed by Guillermo del Toro. It’s startlingly conventional for a filmmaker whose work includes the brilliant “Pan’s Labyrinth” and “Hellboy” — “Crimson Peak” often recalls an era of simpler tales of hauntings from the 1930s and the 1940s. In spite of its ineffective scares and been-there, done-that feel, del Toro’s latest is still an enjoyable flick.

Fourteen years after seeing her mother’s ghost, Edith becomes an aspiring author in 20th century Buffalo, New York. For the first forty minutes of the picture, she falls in love with one of her father’s potential business partners, the mysterious baronet Thomas Sharpe (Tom Hiddleston), before marrying and moving to England with him.

Thomas and his sister, Lady Lucille Sharpe (Jessica Chastain), live in a dilapidated Gothic mansion. The mansion is called Allerdale Hall, but, to no one’s surprise, it’s nicknamed Crimson Peak. Del Toro and cinematographer Dan Laustsen show off all the production team’s meticulous work, slowly passing the camera through gloomy, cavernous chambers and suffocating halls that look thoroughly lived-in. As with most of del Toro’s work, the sets are the real stars of “Crimson Peak.”

That’s not to say the actors don’t fare well. Wasikowska delivers on the spunky, resourceful heroine front, and Hiddleston works his charm with effortless grace while hinting at vulnerabilities that boil beneath his skin.

Surprisingly enough, it is Chastain’s performance as Lucille that is the most memorable of the film. Her Lucille is stiff-lipped and in constant, silent agony. She often slinks into the background for much of the film’s first half, letting Hiddleston steal the attention. As “Crimson Peak” progresses, Lucille gradually reveals her mental instabilities, allowing Chastain to go wild.

Before that happens, del Toro indulges in his ghost story, or as one actor puts it, his story that happens to have ghosts in it.

Edith encounters the wraiths at night, and each confrontation clues her into the fact that Thomas and Lucille are not who they appear to be. As she begins to unravel the mystery of Crimson Peak, she enters a deadly battle for her life.

“Crimson Peak” throws out a few jump scares, but fails to sustain suspense when Edith comes under attack by the CGI ghosts’ skeletal forms, which ooze a blood-like substance. The ghosts ultimately prove worthless as narrative devices, as they do little more than occasionally pop up in a tale that might have been better suited for a psychological thriller angle.

“Crimson Peak” is never short on fun and it will be a reliable Halloween-night movie. The writing is sharp and witty, and dark humor consistently plays a part in the dialogue.

It’s unfortunate that del Toro’s misjudged use of CGI drags down great performances and stellar production design. The film might have been scary or suspenseful had the actors playing ghosts not been so digitally enhanced. A better choice might have been to let all the focus fall on Chastain, the real horror of “Crimson Peak.”