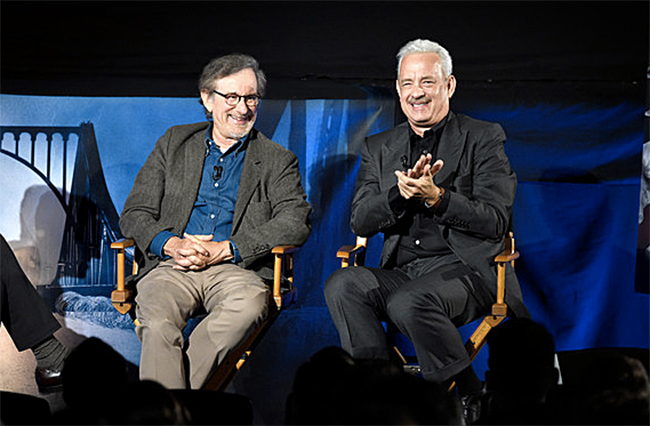 Steven Spielberg’s latest film “Bridge of Spies” transports audiences behind enemy lines during the Cold War. The acclaimed director recreates the true story of a man forced to confront the threat on the Soviets' home turf. With an exceptional performance by Tom Hanks, “Bridge of Spies” tells a heartfelt, epic espionage tale.

Insurance lawyer James Donovan (Hanks) finds himself providing representation to accused Soviet spy Rudolf Abel (Mark Rylance) as part of a publicity stunt. Though he bonds with the mild-mannered Abel, his client is found guilty and Donovan becomes loathed by the public for supporting a spy. Around the same time, pilot Francis Powers (Austin Stowell), flying an experimental “U2” plane over Russia, is shot down and taken hostage. The FBI contacts Donovan and assigns him a mission — he must travel to Soviet-occupied East Berlin and negotiate a prisoner swap in order to rescue the downed pilot.

The film’s complex plot reflects the complicated true story it’s based on, making “Bridge of Spies” feel like two films jammed together. The first hour plays like a courtroom drama on fast-forward, depicting a compelling case about constitutional rights and justice for accused criminals. Then, the plot turns into a political spy thriller featuring a man stuck in enemy territory who must negotiate with America’s Number One Enemy. On the surface, the shift is disconcerting, but Spielberg makes it work by keeping a tight focus on Donavon’s struggle to serve his country and save as many lives he can.

Typically, Spielberg war films come in two flavors — R-rated, gritty “Saving Private Ryan-style” stories and watered-down, PG-13-rated re-telling such as “War Horse.” “Bridge of Spies” falls into the latter category, but it doesn’t necessarily take away any of the darkness of the Cold War. The film shows the threat of nuclear annihilation that loomed over America, along with the paranoia that resulted from the fear. There isn’t much violence or high-stakes action sequences apart from the crashing of the U2, but Spielberg’s depiction of Soviet-dominated Berlin is dreary and bitter. He doesn’t give the “Schindler’s List” treatment to the suffering of civilians separated from loved ones by the Berlin Wall, but the misery still feels vibrantly real.

Of course, Spielberg’s fingerprints cover the entire movie. The soulful score, the warm lighting and the heartfelt speeches are all accounted for. Some may also recognize a touch of heavy-handedness. One scene oddly parallels kids playfully hopping fences with an early scene of German citizens desperately trying to vault the towering Berlin Wall. The moment feels contrived and manipulative as it tries to force audiences to choke out more emotion.

Hank’s portrayal as the patriotic, humorous Donavan truly drives the film. His tough, but kind-natured spirit makes him an easily likable protagonist audiences want to see succeed. His bond with Abel becomes a highlight of the film, strengthened by Rylance’s tame and quiet portrayal of the Soviet spy. In comparison, Stowell fails to demonstrate an equally strong personality as Powers, who gets so little focus that he feels like a damsel-in-distress rather than a complete character.

“Bridge of Spies” isn’t Spielberg’s greatest war film, but it offers a touching and thrilling rescue story. Hanks and Rylance’s performances overcome an occasionally complex plot, while Spielberg manages to capture the tension present during what many considered the potential warm-up to World War III. While this period piece may not reach the Oscars, Spielberg adds a well-made historical epic to his expansive filmography.