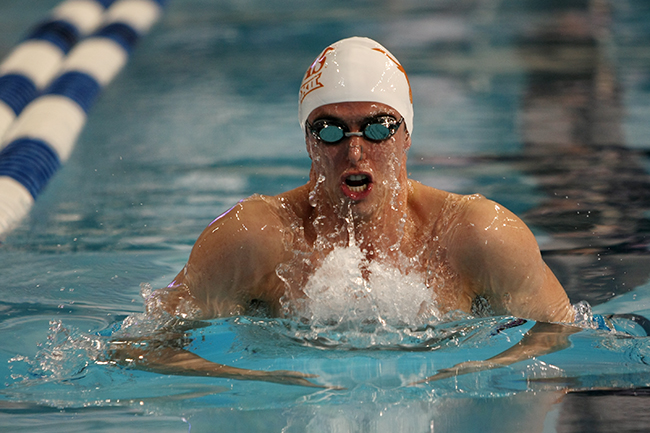 Freshmen and veteran swimmers and divers alike will come together against Florida and Indiana to begin their bid for the Longhorns' 12th national championship.

The No. 2 and No. 9 nationally ranked freshmen swimmers Townley Haas and Ryan Hart join 22 seasoned Longhorns on the back of their 11th NCAA national championship.

“This freshman class fits in extremely well and they’re getting along with guys [as if they haven’t been] here for a couple months, like they’ve been here for a year plus,” Licon said. “The first couple weeks of school we did a lot of team-building activities to get [the freshmen] integrated, get them close with their class. One thing with us, we start working hard right off the bat. I guess suffering could be the right word, we’re all kind of suffering together right off the bat and in a way I feel like that brings us closer together, as cheesy or silly as that might sound.”

Licon is not changing much in regard to his training — he has a plan and it’s working.

“If it’s not broke, don’t fix it — try to do the same thing but better as last year,” Licon said. “This really isn’t the year to change too much, just because so much is riding on it — both in the collegiate season and outside of it, with the Olympic trials in the future.”

This weekend’s meet will feature the Longhorns, the Hoosiers and the Gators competing in an Olympic-sized 50-meter pool Friday and a 25-yard short-course pool Saturday, both at the Lee and Joe Jamail Swimming Center. The Longhorns have not swum such a meet during their regular season and are curious for the results.

“I’m very curious to see how the meet’s going to go with half the meet being long-course,” Licon said. “We’ve never raced a long-course meet in the collegiate season. I’m going to give it my all and see what the result is, and I think it will give me and the rest of my teammates a good indication of where we are fitness-wise.”