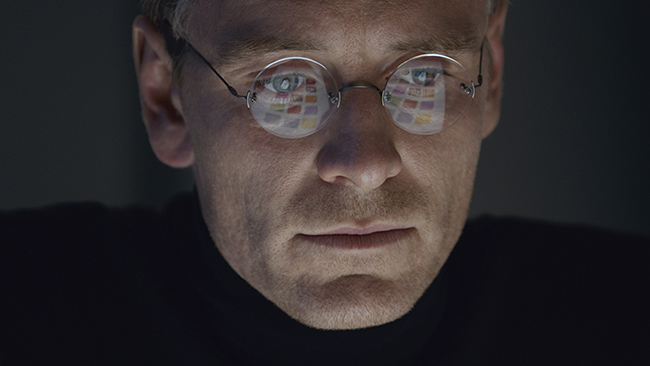 “Steve Jobs” ditches the traditional biopic arc and instead presents Steve Job’s person and legacy through a three-act “play.” Screenwriter Aaron Sorkin simply paints a portrait of the tech mogul, framed by the launches of three of Jobs’ iconic products.

The film opens with a black-and-white flashback to Arthur C. Clarke, the writer of the classic novel and film “2001: A Space Odyssey,” describing the immense potential of the then mammoth-sized computer. The scene serves to foreshadow an essential and impending revolution in the computer industry. Marked by his hubris, Jobs aspires to grasp the absolute fullest potential of the computer — even if that means cutting ties with the people closest to him.

At center stage is Jobs (Michael Fassbender), a troubled and flawed man who dreams of delivering his vision of technology to the masses. Jobs maneuvers around behind stage, merely thirty minutes prior to the launch of the Macintosh, the doomed NeXT cube and the massively popular iMac. The film focuses not on the products he’s about to keynote, but on the conflicts that unfold between him and some of his most intimate colleagues and acquaintances. A few of the people he encounters include his former pal and tech genius Steve Wozniak (Seth Rogen), his adopted father of sorts John Scully (Jeff Daniels) and Joanna Hoffman (Kate Winslet), his servile assistant.

The dialogue allows the characters to shine, creating an acting showcase that is destined to be an awards favorite this winter. Sorkin’s famous and often-mimicked “walk and talk” technique allows for actors like Fassbender to take full command of the screen, withholding from breaks in dialogue or digressions that would detract from the actor’s unwavering and often-ferocious performance. While Fassbender doesn’t quite encapsulate Jobs’ physicality and looks, he flawlessly evokes the portrayal of a corrupted, larger-than-life man.

The supporting roles are also terrifically cast, with Daniels giving another moving portrayal of a conflicted man-in-charge. Rogen is surprisingly effective as the likable Wozniak, combining his sense of humor with an emotional punch that ultimately leaves the fast-talking Jobs speechless. Jobs’ assistants (Winslet and a stellar Michael Stuhlbarg) effectively illustrate two people bossed around and manipulated by Jobs over the years. The real revelation, however, is the trio of actresses that play Jobs’ daughter, Lisa. Perla Haney-Jardine, who plays Lisa in the final act, conveys a sense of pain and anguish after having to go to a family friend to pay for her Harvard tuition and not her own father, the then-multimillionaire.

Director Danny Boyle, known for the peculiar energy he injects into his projects, compliments Sorkin’s style seamlessly, matching the writer’s bravura for words with visual fluidity reminiscent of “127 Hours” and Oscar-winning “Slumdog Millionaire.” Boyle’s talent for finding dynamic imagery in a simple setting is on display throughout the film. In a scene showing Jobs and Hoffman talking intimately in a hallway, the video screen they stand next to starts broadcasting the launch of the Skylab, an ill-fated space project that never reached fruition. The visual allusion acts as a metaphor for the doomed NeXT computer, a project that Jobs himself presents as a scam that packs little innovation within its cubical frame.

Taking form in an innovative tripartite structure, “Steve Jobs” is a tremendously effective character study that focuses on one man’s ambition. In contrast with the previous film based off the tech giant, “Jobs,” Sorkin paints Jobs not as a hero but as a corrupted man, a father who finally comes to terms with the daughter he always disregarded.