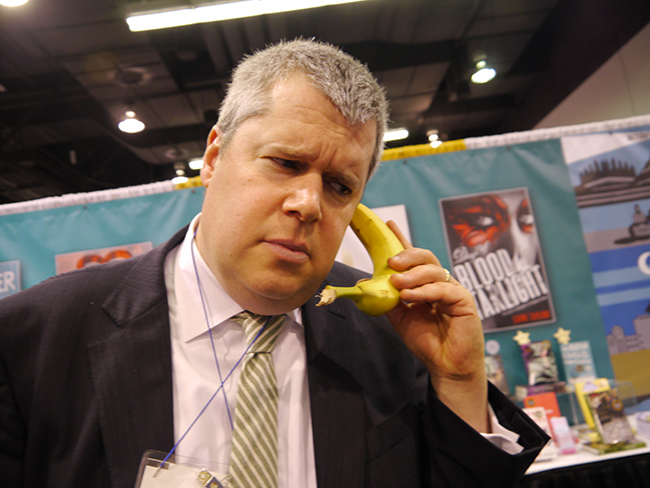 On Saturday, Lemony Snicket will present his latest book “Why is This Night Different From All Other Nights?” at the Paramount Theatre as part of the annual Texas Book Festival. The book is the last installment in his All the Wrong Questions series, which details the adventures of 12-year-old Snicket. Author Daniel Handler, Snicket’s representative, spoke with The Daily Texan about A Series of Unfortunate Events and other miserable things.

The Daily Texan: How does All the Wrong Questions connect back to A Series of Unfortunate Events?

Daniel Handler: I guess it’s kind of a prequel. It takes place before A Series of Unfortunate Events, but I mean so does the Old Testament. But I don’t think the Old Testament is generally considered a prequel to A Series of Unfortunate Events. All The Wrong Questions deals with Mr. Snicket’s own childhood and his apprenticeship in a secret organization which was formed long before the Baudelaires were born.

DT: What made Mr. Snicket decide to write about his own story?

DH: He discovered things during his childhood and during his apprenticeship that were alarming enough that they ought to be written down for future use. Although, it appears that the books are being marketed as entertainment, so people are much more likely to be upset.

DT: How did you get to working with Mr. Snicket?

DH: We admired each other’s work and eventually in realizing that the more he showed up to talk about his own work, the more suspicious and alarmed people became. He asked me if I would step in as kind of a side job. It’s worked out pretty well for both of us.

For instance, right now Netflix is adapting A Series of Unfortunate Events for the screen and I am writing the script. They’re hoping to begin filming it in the spring, but things go terribly wrong all the time so it’s hard to know.

DT: What should people take away from Mr. Snicket’s work?

DH: I think that Mr. Snicket would hope that people would just step away from the books rather than take anything away from them. With my own work, I think if people are interested in the world we live in and how strange and threatening it often feels, if readers feel that way about the world, they may take some solace and excitement in my own work. But it’s difficult to know because I write it.

DT: Why do you think children are drawn to Snicket’s books even though they address dark subjects?

DH: It’s hard to think of a story that’s interesting that doesn’t at least have the threat of something terrible happening in it. I think if you were a child and you were looking around the world, you’d see many things that seemed unjust and upsetting, and you’d be more likely to take seriously books which take that seriously.

DT: Why does Mr. Snicket love to give vocabulary lessons?

DH: I think language is a slippery thing — particularly when you’re a child and you’re learning language to try to get straight what different words mean, when hardly any word actually means anything at any given time, it can be difficult. So I think Mr. Snicket provides reassurance that language is very slippery and that it’s almost impossible to get a grip on what anyone is talking about almost any of the time.

DH: Oh gosh, there’s so many good words. I like the word “wrong” a lot. Particularly when I’m writing books because I think wrong automatically makes a story. If he ate the wrong sandwich or she opened the wrong door, that’s already interesting. I happen to know that Mr. Snicket’s favorite word is “defenestration,” which is the word for the act of throwing someone out a window. It’s a word that one doesn’t have cause to use a lot, but it’s very handy when you do.

DT: Where is Mr. Snicket now and is this the last of his world that we’ll be hearing about?

DH: I can’t imagine that it would be, but then of course something terrible could be happening to Mr. Snicket at any moment. Both Mr. Snicket and I are basically on our way to Austin, Texas and as you know terrible things can happen to you while you’re traveling, whether or not you’re afflicted with wanderlust. I know Mr. Snicket is preparing for another project and reading a great deal of old Chinese poetry, which is often difficult to understand — particularly if you’re neither old nor Chinese.

DT: Anything you want to say about the festival?

DH: People should be aware of open manholes. You wouldn’t want to fall into a manhole when you are on your way to see an event at the festival. I think that would be upsetting.

What: This Is A Very Fortunate Panel
When: Saturday, 11a.m. – 12p.m.
Where: Paramount Theatre