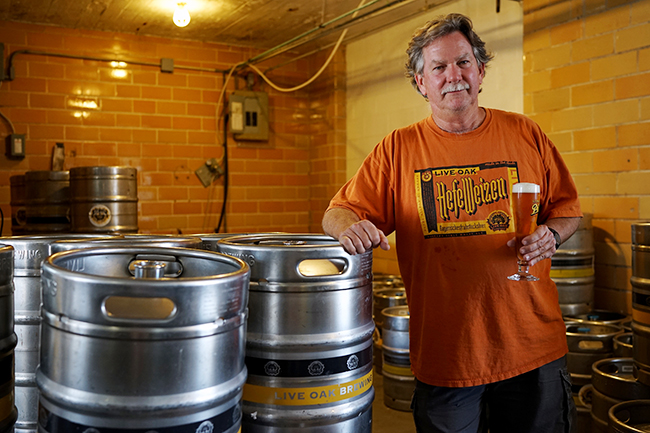 This Oktoberfest season, UT students can be seen all around Texas knocking back a couple of cold ones. However, few may realize that their higher education experience could lead to a career in beer.

UT alumni Chip McLeroy and Brad Farbstein, owners of Live Oak Brewing Company and Real Ale Brewing Company, respectively, never thought they would end up working in the beer industry after finishing college. Today, the prominent craft brewery owners produce and distribute beer throughout the state. This Saturday, Real Ale will host two Oktoberfest events located at The Goodnight restaurant in Austin and their taproom in Blanco, Texas.

McLeroy graduated from UT in 1989 after receiving his bachelor’s and doctorate degrees in biochemistry. While working on his post-doctorate in California, he met a colleague who taught him some of the nuances to beer making, and ended up pursuing it as a serious hobby. McLeroy moved back to Austin and continued making beer with homemade brewing equipment. He joined the Austin Homebrewer’s Club and met co-owner Brian Peters. Soon, the two started collaborating on their favorite beer recipes.

“I moved back here with this nice equipment and [Peters] had a stove,” McLeroy said. “We were interested in making some of the same types of beers like pilsner and hefeweizen. Then it just got out of hand and all of a sudden we had a brewery.”

When Live Oak opened in 1997, McLeroy said it was difficult for the two to get a brewery started in Austin. Craft beer wasn’t as popular as it is today and raising money was difficult since people didn’t know exactly how the business operated, according to McLeroy.

“Today when you want to start a brewery, people know what you are talking about,” McLeroy said. “When we started people were like ‘wait a minute, what are you doing? Brewing in your bathtub?’ Most restaurants didn’t have much in the way of craft beer.”

After graduating, Farbstein spent some time waiting tables in Austin. He entered the brewing business working for a beer distributor and bottling for Real Ale Brewing Company in Blanco after telling his parents he wanted to start his own brewery.

“I talked to my parents about my desire and they said I was crazy,” Farbstein said “But my dad’s advice was that if I really wanted to open a brewery I should go work for somebody else and learn on someone else’s dime.”

A few years later, Real Ale’s former owner called Farbstein, who had been working for a beer distributor called Microbility, saying they wanted to sell the brewery. Farbstein took the opportunity to own and operate the business that is now one of the most successful craft beer makers in the country.

“When we started, I never thought we would be selling 5,000 barrels a year,” Farbstein said. “Today we produce and sell over 65,000 barrels.”

The two men love their work, but both said joining the business is not something that should be taken lightly. They advised other students looking to pursue beer to give due diligence and understand the demands that brewing beer requires.

“People think it’s fairly glamorous, but a lot of people don’t realize that there is a lot of physical labor involved in getting the beer made — 90 percent of it is cleaning,” Farbstein said. “I tell my employees every day that you spend more time at work than you spend anywhere else in your life, and you should be doing something that you enjoy.”

The two breweries have recently undergone expansion, but plan on producing the same quality beer and keeping Texas customers happy. Real Ale is hosting an Oktoberfest celebration this Saturday at its recently expanded brewery. Live Oak normally celebrates “Oak”toberfest celebration around this time, but is opening a new brewery in November.

“We’ll have a capacity that’s large enough to make enough beer and we’ll be able to supply some of these larger retailers like HEB,” McLeroy said. “It’s more exciting than I can even handle.”