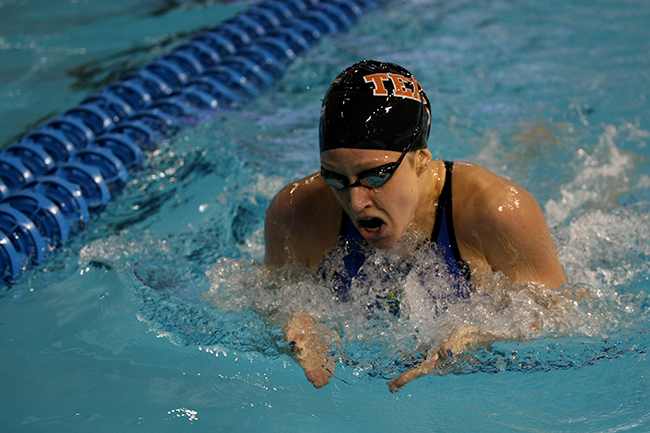 Despite two top-10 teams coming to town this weekend, junior swimmer Madisyn Cox isn’t nervous. As one of six All-Americans and 12 returning upperclassmen, the junior feels confident in her team. She said the Longhorns are ready to take on Florida and Indiana at home this weekend.

“We might’ve been nervous in the past, but I really feel like this team is coming together well,” Cox said. “It’s really exciting to see and train with every day.”

Add on the No. 4 recruiting class in the nation, according to SwimSwam, and Texas is poised to make another run for the NCAA championships. The Horns finished seventh last year. Cox’s top-eight finishes in the 200 and 400 IM played a key role in Texas’ highest NCAA finish under head coach Carol Capitani.

“For myself, I want to be better than I was last year at [the NCAA championships],” Cox said. “I have specific time goals in my head, but I just want to move up in placings and score the best I can possibly score for the team.”

Cox kept herself in shape during a full summer of training. She swam at both the World University Games and the USA Swimming National Championships, ramping up workouts when she rejoined her Texas teammates in the fall.

“We’ve been really grinding with the team, getting into that good training phase,” Cox said. “We’ve all been working hard — it’s very positive on deck and we’ve had some great workouts.”

The meet gives the Longhorns a chance to break up their training and focus on competing. The double-duel meet format is atypical for collegiate swim meets. On Friday the schools will compete in a 50-meter Olympic competition pool. Saturday, they’ll revert to a traditional collegiate 25-yard short-course.

“For meters, you have to take it more smooth,” Cox said. “You need to have more endurance and be able to finish your races. With short-course, you really focus on under-waters because there are so many walls so you really need to push those under-waters.”

Capitalizing on the strategy required for each length will likely be key for Cox and the Longhorns this weekend. But it won’t be easy with NCAA top-10 Florida and Indiana in the lanes beside them.