Longhorns dominate in day one of season-opener 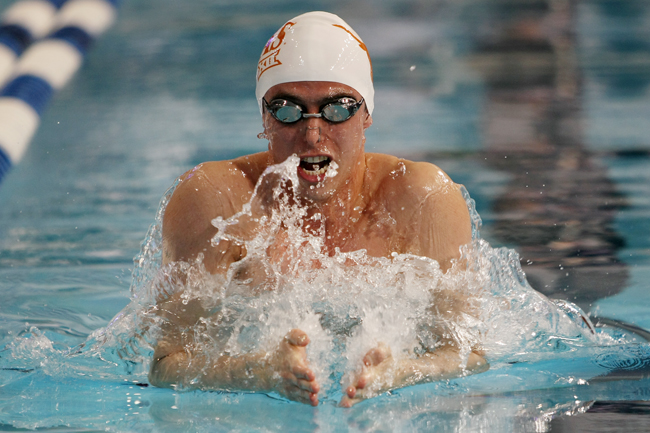 The last time Texas men’s swimming and diving hit the pool in a real meet, it hoisted its 11th national championship.

On Friday, Texas began its quest to add a 12th title to its trophy case with a dual meet against Indiana and Florida at the Lee and Joe Jamail Texas Swim Center. Texas was ahead of Indiana 201-98 and Florida 179-121 at the end of day one.

Day one consisted of long events, and Texas dominated the entire way, with a Longhorn finishing in the top three in each event.

Texas ended the day with a first place finish in the 200-meter free relay.

Texas women’s swimming and diving put up a solid performance in the long-course meet on day one of its season opener against Indiana and Florida. The Longhorns beat Indiana, 168-130, and Florida, 171-129.

Texas freshman Joanna Evans won the 800-meter freestyle with a time of 8:54.12. Florida freshman Jessica Thielmann was right behind Evans with an 8:55.80. The Longhorns kept the momentum going with first- and second-place finishes in the 200-meter freestyle. Junior All-American Madisyn Cox dominated the pool with a 2:01.58 – almost two seconds faster than freshman Quinn Carrozza’s second-place time of 2:03.40.

The 100-meter breaststroke was a thrilling fight to the end. Texas freshman Olivia Anderson took a close second place with a time of 1:09.71, behind Indiana freshman Lilly King’s 1:09.38.

The 200-meter butterfly proved to be another close race, with a little more than seven-tenths of a second separating the top three finishers. Texas junior Maggie D’Innocenzo placed third with a 2:16.92. Florida freshman Taylor Katz won the race in 2:16.17.

The Longhorns saw another tight finish in the 400-meter freestyle, as Evans came in second with a time of 4:20.30 behind Indiana sophomore Kennedy Goss’s 4:20.10.

Senior diver Meghan Houston placed second in the one-meter dive with a score of 278.55.

Texas capped off the day with a sound two-second victory in the 200-meter freestyle relay, finishing the race in 1:44.54.

Texas wraps up the dual meet tomorrow with short-course events against Indiana and Florida. The first event begins at 10 a.m.