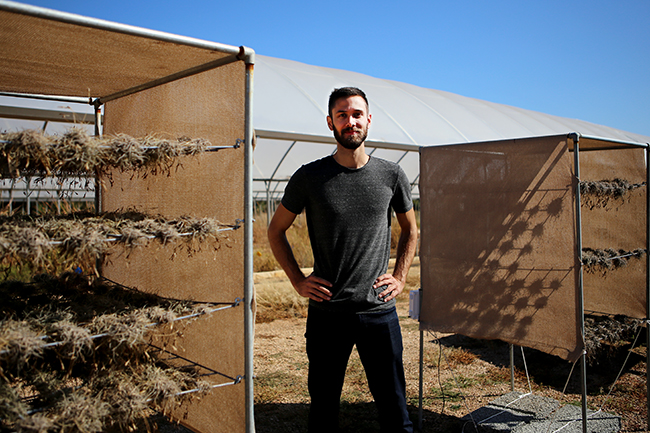 When most people pass Texas trees, they don’t notice the spiky-looking colonies of ball moss. But when UT alumnus William Niendorff sees the pale green plants, he sees untapped potential.“Tillandsias are remarkable plants, and they are really misunderstood, so that is a reason I wanted to study them,” Niendorff said.

For the past two years, Niendorff has been investigating ball moss, Tillandsia recurvata, as a plant to be used for plant-covered roofs, or green roofs. Niendorff, who initially received funding for the project through the Lady Bird Johnson Wildflower Center, worked on the research under the late Mark Simmons, who was the Director of Research and Experimental Design at the Wildflower Center.Green roofs can regulate temperature, substantially reduce energy consumption and provide an aesthetically pleasing habitat for native insects and other animals, according to a 2001 study in Energy and Buildings. Currently, most green roofs are made with soil-based plants, such as grasses or succulents. Niendorff’s idea of using a rootless, completely soil-free plant is a new concept in green roof design.

“One of the greatest things about Tillandsias is that they don’t need soil at all, which means that if you’re using them for a type of green wall or green roof, you don’t have to worry about that extra weight on the structure,” Niendorff said.

In his recent study, Niendorff created three-dimensional models to test the ball moss plant’s capability to provide the traditional advantages of green roofs, such as temperature control, decreased runoff and habitats for native species. The study proved that ball moss green roofs are feasible projects, and Niendorff plans to conduct further trials to explore the most efficient models.

The ball moss models are low maintenance and obtain water from the air, nitrogen from bacteria and other nutrients from blown dust. Ball moss is not actually a moss, but an epiphyte, meaning it does not affect its host plant.

Since they obtain everything they need independent of a host, ball mosses can grow on almost anything — ­trees, rocks or wire models. Niendorff’s models are constructed around metal frames, and instead of being restricted to a single layer, the plants can be arranged in many different configurations.

“One of the things that I like most about my project is that it’s ridiculously simple,” Niendorff said. “It’s a concept that already works in nature.”

One downside to the project is that the ball moss green roof models contain only one species of plant, while most green roofs are composed of several different species. Diversity in green roofs is an advantage because it makes the system more adaptable to change in environmental conditions.

The next step for Niendorff’s project is investigating the logistics of ball moss green roofs, and finding out which arrangements work best. Niendorff also wants to explore the public’s opinion on ball moss through surveys at the UT School of Architecture. He is eager to see data on what people think of ball moss, especially since the plant has a history of being unpopular.

Niendorff hopes to publish his research next summer and his paper will add to the small amount of literature on ball moss available. Niendorff said even books written specifically on the genus Tillandsia make little to no mention of ball moss.

“Ball moss is a discarded plant, which makes it so exciting for me,” Niendorff said. “It’s like how to turn trash into treasure.”