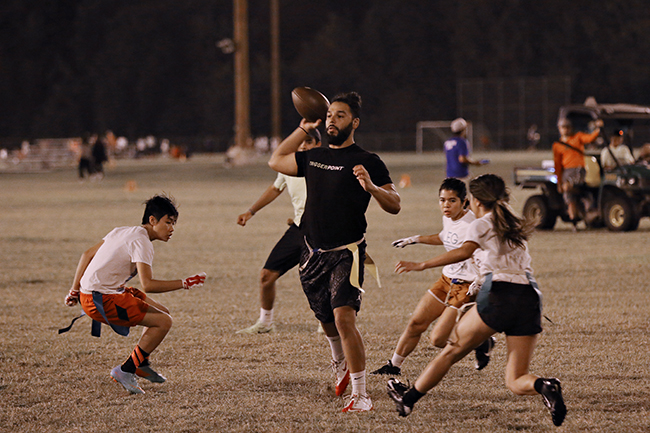 Editor’s note: Whitaker Fields closed Monday for renovations and will reopen in fall 2016. Below is a column from one intramural participant who fought for a flag football championship on Thursday night, the last night Whitaker hosted flag football this year.

Starting at 7 p.m., we faced the top team in the division, the EcclesiATHLETES. Last time, we lost by two touchdowns against this team. Seeking revenge, we snapped the ball to start the clock and focused on the goal: getting the shirt. We played a no-huddle offense while they milked the whole play clock. With one play left in the first half on their own 30-yard line, they attempted the short-throw, lateral trick play. Scrambling to grab the defender, we swiped them at the 20-yard line to save the touchdown. Wait. Flag. Push in the backfield on the defense. The ref snatched the ball, walked to the spot of the foul and took ten Shaq-sized steps forward. One play remaining. We rushed hard, passed the line and pulled the flag of the quarterback behind the line of scrimmage. Relief. 7-7. Halftime.

At the start of the second half, the EcclesiATHLETES started with the ball to no success. Again, operating in their slow offense, we contained them and got the ball back off of a punt. Fast-forward, eight minutes left, we have the ball. Hike, rush, score. Miss the extra point; we’re up six.

With the ball again and six minutes left, our QB drops back, interception. Their ball.

With the ball on their own 15, we stop them on first down. On second, the ball’s in the air, we swat it down and begin to celebrate. Flag. Pass interference. Automatic first down. Next play, stopped. This continued on for two more downs and they called a timeout pondering fourth-down options. They elect to punt with four minutes remaining. Ball’s in the air, our punt receiver catches the ball — juke, juke, juke – shakes off six defenders and hobbles into the end zone for the score. We miss the extra point, and they get the ball on their own 15. We’re up 12 with six plays remaining.

First play, 80-yard bomb, caught, score (with an extra point). Up five on our own 15, first down. The play call? Run four times, try for a first down; if not, we punt to them with one play left. Ready for the play, long snap count, false start. Move it back. Next play, hike, scramble, pressure, fake the throw, run a little, still behind the line of scrimmage, spike attempt, defender gets a hand under the ball, interception.

Up five, four plays to go. Their ball, red zone. First down, throw for no gain. Second down, scramble, ball’s up, we get two hands on the ball and can’t hold on. Third down, hike, scramble, roll out, run around, a little more time, lob in the end zone, touchdown.

EcclesiATHLETES up one, go for two and get it. One play left, we plan a tip play, launch one down the field to their 30, four defenders in the area — interception.

Game over. Lost by three.