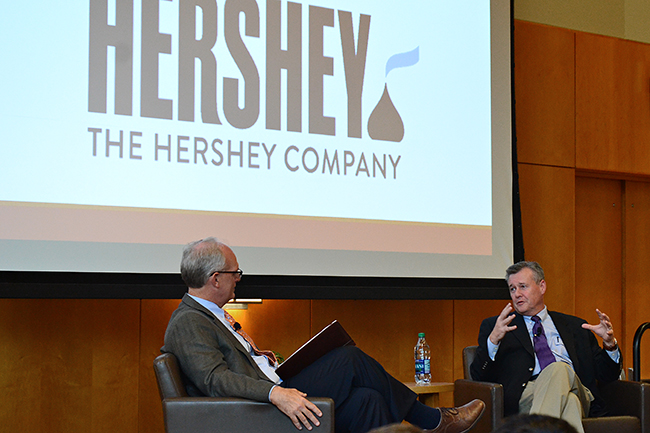 While some students came for the free chocolate bars, others came to a Tuesday lecture to hear Hershey president and CEO John Bilbrey give advice and discuss his career.

Bilbrey, who was named CEO in June 2011, said his curious mind allowed him to overcome some of his weaknesses in certain areas in order to advance his career.

“There’s a certain toughness and perseverance required, and you have to be able to overcome more obstacles than people making it easy along the way,” Bilbrey said. “That’s certainly a very important piece of it. I was always raising my hand, ‘Why can’t we do it this way, why couldn’t we do that?’ I think I was quite annoying to my boss, probably.”

Bilbrey said it is important for a corporation to give back to the community it is involved in and said his company tries to adhere to that principle by using local resources in production.

“One of the interesting things about the food business is food is local, and manufacturing close to where it is going to be consumed is also really important,” Bilbrey said. “These people love the company, this is their company, so we all make up this company.”

“He also [advised] to remain curious and to remain optimistic and stay on the path of always learning about your industry,” Khan said. “I think it’s really important … even if you’re 40 years old, you still have to learn as if you’re really young. I think he emphasized the fact that you need to maintain that sense of curiosity and remain a student of your industry.

Bilbrey came to University as part of the VIP Distinguished Speaker Series jointly hosted by the McCombs School of Business and Undergraduate Business Council. Bilbrey’s philanthropic work in the community made him a good fit for the series, according to Kenny Young, a finance sophomore and the series’ chair.

“I know that there’s some misconceptions right now that corporate America is bad … and doesn’t do anything progressive in terms of giving back,” Young said. “I think [Bilbrey] is definitely one of those people who has shined a light in a positive direction about how utilizing corporate image and brand can ultimately be a good thing.”