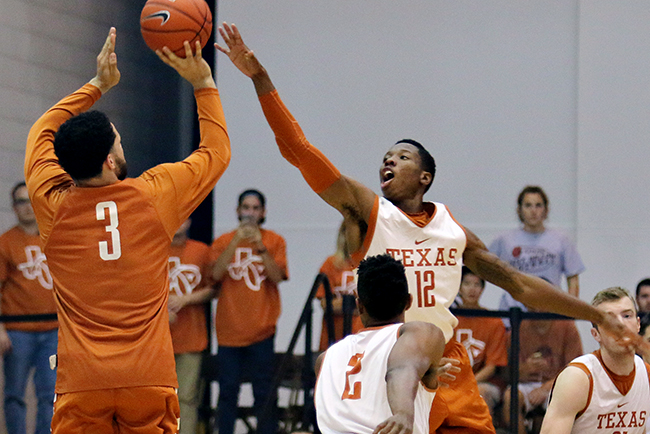 A little bit of Kansas' Allen Fieldhouse in Austin.

That’s how senior guard Demarcus Holland described Wednesday night. A near capacity crowd of 3,129 huddled into Gregory Gym for the Longhorns’ Orange-White scrimmage.

“It was really packed, really on top of the floor,” Holland said. “It was a nice atmosphere.”

It was a rare sight for some and the first time for many to see basketball played where the volleyball team has made its iconic home. In fact, junior forward Shaquille Cleare’s first two baskets early in the scrimmage were the first points the men’s basketball team has tallied in the gym in 38 years.

The opportunity for the scrimmage arose when the NCAA moved the start of practices up by two weeks in 2013. Smart said when he was at VCU, he had a similar scrimmage to break up the monotony of practice.

“We actually get six weeks of practice before our first game,” Smart said. “We wanted to take a day and get some basketball work and get it in front of some fans and officials. Obviously it’s a way different feel for our guys.”

The scrimmage, though, was more than a time for nostalgia.

Smart decided to play two 15-minute halves instead of the usual 20 with the team divided into two and only a handful guys for each side on the bench. Still, Smart’s system took an obvious toll on the players because of the lack of depth on both squads.

“It’s a lot for those guys when there’s not a lot of subs,” Smart said. “Fatigue definitely played a factor.”

Freshman guard Kerwin Roach introduced himself to Longhorn fans early in the game. Within the first five minutes, Roach tallied a three pointer, a steal and a breakaway layup to give the white team an early 11-5 lead. Roach finished the game with 18 points and five assists.

Smart said fans saw the potential he has tonight.

“He’s already a good player and a guy that can help us in a lot of ways,” Smart said.

Cleare, also a fellow newcomer after sitting out last year following his move from Maryland in 2014, added to the white team’s dominance in a 72-63 win. He posted 11 points and five rebounds.

Meanwhile, the orange team’s veteran guard duo of junior Isaiah Taylor and senior Javan Felix struggled. Taylor ended the night 1-of-6 shooting from behind the arc and three assists, while Felix was 1-of-5 on three point attempts and tallied just seven points.

But the Longhorns still have a little over two weeks to fix the issues before their first game against players in a different colored jersey. When that night comes, Holland said he hopes the Frank Erwin Center has the same atmosphere as Gregory did Wednesday night.

“We want it to feel as packed in at the Erwin Center because that was fun,” Holland said.