Where are they now? Former track star trains at UT for 2016 Olympics 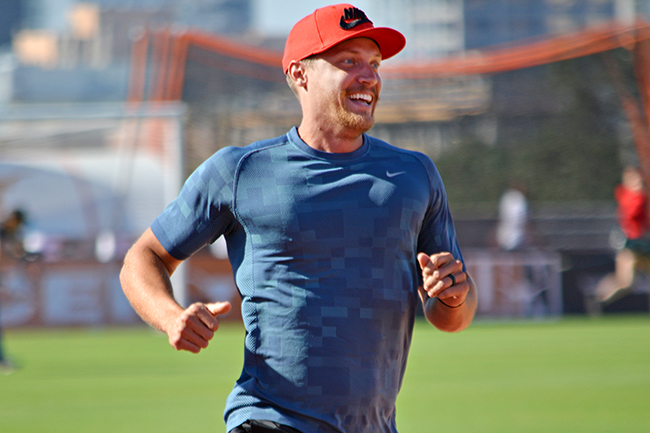 Trey Hardee has compiled his fair share of accomplishments. Since his arrival to the University of Texas 11 years ago, Hardee’s résumé includes two NCAA championships and a silver medal at the 2012 Olympics.

Today, as he looks to prepare for the 2016 Olympics, Hardee utilizes the same facilities on campus that helped launch his career over a decade ago.

Hardee trains under track and field head coach Mario Sategna, the same coach who drew him to the University in 2004. At the time, Hardee found himself in between colleges after his former school, Mississippi State, lost its men’s indoor track and field program.

Hardee was instantly drawn to Texas, despite having invitations to visit multiple schools. He said Sategna’s training style was similar to that of Mississippi State.

“As soon as I got on campus, I was like, ‘This is it,’” Hardee said. “Me and Mario have a great relationship, and we had a good training group at the time. And that was it.”

Sategna said even after his collegiate days,  Hardee embodies what Texas is about.

“Obviously, he’s represented the University of Texas — not just our track and field program — to the highest level,” Sategna said. “He’s had a hell of a run, there’s no doubt.”

At UT, Hardee was dominant, winning conference championships with his teammates and setting a collegiate record for the decathlon with 8,465 total points at the Texas Relays in 2006. Hardee described that moment as one of his favorite memories at Texas.

“It’s really cool to just hoist the trophy and be with your buddies and have this cool moment that nobody can take away from you,” Hardee said.

Hardee found plenty of success on the national and world stages, too. He won back-to-back world championships in 2009 and 2011, and was the third athlete to ever do so. With one Olympic medal under his belt, Hardee now focuses on training to win another in 2016.

Hardee’s wife, Chelsea, said his passion for the decathlon shines through even when he just talks about it.

“Each day he wakes up ready to train, ready to give max effort to achieve maximum results,” Chelsea said. “Through the highs and lows of his career, one thing has remained constant — his willingness to put it all on the line to be the best.”

Hardee has also participated in various charitable events. In 2013 he held a charity golf tournament benefiting The Flatwater Foundation, which Chelsea is director of development of. The charity provides mental health therapy for families and individuals affected by cancer. On Oct. 17, Hardee jogged with kids around the track at Mike A. Myers Track and Soccer Stadium as part of an event for Marathon Kids.

Hardee said wherever his journey takes him, he enjoys being an ambassador for the University of Texas.

“I represent the school, and I carry that burnt orange flag,” Hardee said. “Every podium I’ve ever been on, I throw up the hook ‘em sign.”