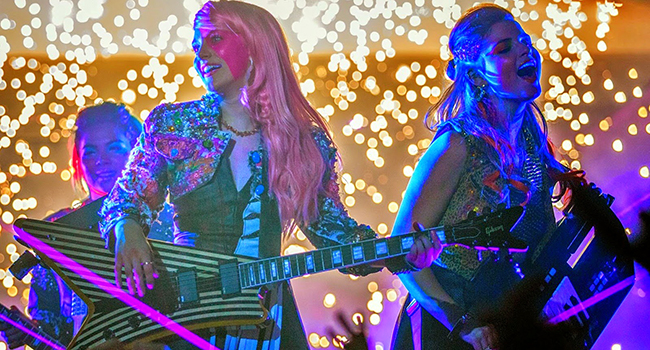 It’s clear that something has gone incredibly wrong when it takes a full hour for Jem, the titular alter ego of the main character in “Jem and the Holograms,” to grace the spotlighted stage. But this Jem isn’t at all close to what fans of the show will be expecting, and neither is this atrocious “adaptation.”

Based on the popular ‘80s cartoon, this vapid, bland re-imagining shares few similarities with its energetic namesake. All the fun of the show has been sucked out and replaced with lazy writing and good-looking teenagers trying to pass as copies of the original characters.

Jerrica (Aubrey Peeples) lives in a blended family consisting of her Aunt Baily (Molly Ringwald), and her sisters Kimber (Stefanie Scott), Aja (Hayley Kiyoko) and Shana (Aurora Perrineau). All the sisters are aspiring musicians, particularly Jerrica, who’s trying to discover who she really is in the aftermath of her father’s death. In an impulsive act, Jerrica creates a video of her singing under the stage name Jem, which goes viral overnight. Her popularity leads to an offer to sign with Starlight Enterprises, headed by the vindictive Erica Raymond (Juliette Lewis). Jerrica soon finds herself having to choose between her family and her career as Jem while also following a series of clues that her late father left for her.

It’s troubling how a film based on a series known for embodying the manic energy of the 1980s comes across as lifeless. There is no creative spark or feeling of genuine enthusiasm. Every time the group bursts out into a spontaneous song, it feels telegraphed and meticulously planned. It seems like a team of business managers, not filmmakers, created these energized concerts scenes, elaborate makeovers and heartfelt messages of self-discovery. In a way, “Jem” isn’t a film, but rather a well-oiled product machine built to sell albums and propel a slew of new, beautiful stars.

“Jem” is so desperate for ideas that it leeches onto social media to lengthen its runtime. The film takes videos of fans of the cartoon saying why they adored the original character, along with others of talented people performing music, and randomly inserts them into various points throughout the story. The use of these clips feels heavily exploitative, especially when these fans open up about how the show helped them deal with their personal struggles.

Writer Ryan Landels’ script fails to patch together a concert melodrama with elements of whimsical, teenage mystery. The dialogue, comprised of an unholy trinity of lame one-liners, exposition and giggling, is torture to the ears. He crams in callbacks to the original show, but they feel unnatural and clash with his rags-to-riches plot. A storyline involving a singing robot could work in the over-the-top world of the cartoon, but it’s bizarre in a flimsy plot that rips off the “dual-identity musician” premise that Hannah Montana already wore out.

Granted, Peeples does put in hard work as Jem, and manages to remain charismatic even when the screenplay fails her. Even armed with an arsenal of insults, Lewis can’t bring anything to the villain despite her hammy performance. Jem’s sisters lack meaningful personalities and are basically interchangeable. Ringwald, who is synonymous with the 1980s, is tragically wasted in an unfulfilled supporting role.

Obviously, the creators of “Jem” didn’t care about crafting a respectable adaptation of the original series or a good movie. So obsessed with presenting addictive pop songs and cool clothes, they forgot that audiences deserve interesting characters and a plot that has stakes. The lesson here is that next time they want to make a musical melodrama for the millennial generation, they shouldn’t drag an innocent cartoon series into it.