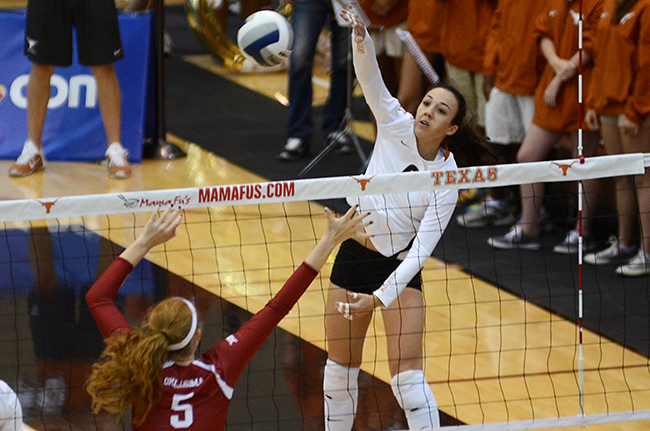 The two best teams in the Big 12 Conference will battle it out at Gregory Gym on Friday night when No. 2 Texas takes on No. 7 Kansas.

Both teams are undefeated in conference play. Texas is 17-1 overall this season and Kansas is a perfect 19-0. This game is important for both team’s conference title runs and could be a defining moment in their respective seasons.

“I think the advantage we have is that we’ve been in this situation,” head coach Jerritt Elliott said. “The upperclassmen know that you can’t look ahead and have to take one game at a time. They have a lot of confidence and they get the job done.”

Because Kansas and Texas have such strong offenses, both defenses will need to be solid to give their team a chance. The Jayhawks have a slightly better back row defense, but Texas has one of the best blocks in the conference. The Longhorns will use that tall front line to try and contain Kansas’ attack.

“Not many teams are going to hit over us,” junior middle blocker Chiaka Ogbogu said. “As long as we’re pressing and talking to each other with our timing, we get touches on [a hit]. We’re playing well together and trust our teammates.”

This powerhouse battle is expected to draw in an at-capacity crowd, and that’s something Elliott said his team wants.

“It’s always nice to have a sold-out crowd come out and support us,” Elliott said. “We’ll have a huge crowd and a great student section.”