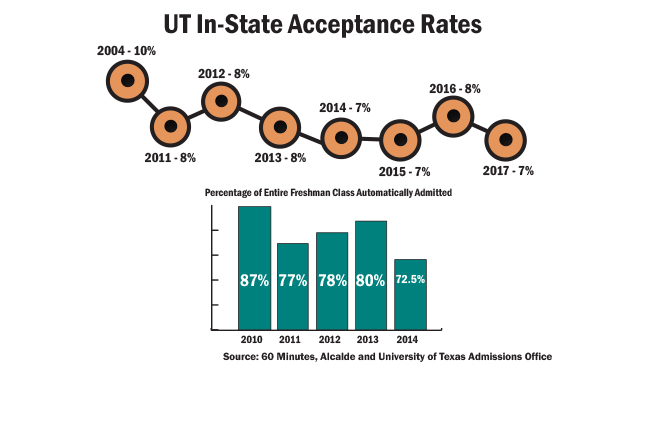 The application process for undergraduate admissions at UT is becoming more difficult as the University decreases the percentage of automatically admitted students.

Joey Williams, interim communications director in the Office of the Executive Vice President and Provost, said state law requires the university to reserve 75 percent of admissions spots for Texas applicants. The other 25 percent is open to students who go through the holistic review or are out-of-state or international students, according to Williams.

“The university prepares for these percent changes two years in advance,” Williams said. “It is the law. It is not a decision we get to make.”

In 1997, the Texas Legislature passed a law known as the top 10 percent rule to increase diversity at Texas public universities. Some students who attend schools in suburban areas may face more competition and may not meet the required percentage to gain automatic admission.

Kathy Ryan, associate high school superintendent for Austin Independent School District (AISD), said some schools with a large minority will not be affected but schools with lower diversity such as Bowie High School might be impacted by the percentage change.

Williams said even if students are not automatically admitted, students still have a chance to be admitted into UT.

“The holistic review is another way not only to assess grades but continue looking at the overall qualities of a student,” Williams said. “UT is still looking to get the best students that represent the population of Texas.”

To make sure the university complies with the law, Williams said the university looks at previous classes to understand the best percentage of students to accept without going over the limit.

Ryan, who is in her 11th year with AISD, said she has seen automatic admissions decrease from 10 percent to seven percent.

“It will be nothing but sadness for our students because less of them will have automatic admittance,” Ryan said. “We would like to see it go back up to the top 10 percent, like other [universities], but we understand it is not.”

Madsen Baum, a junior at Pearland Glenda Dawson High School, said the automatic admissions percentage change could impact students because they might feel it is too difficult to be admitted outside of the top seven percent.

“It’s unfair to those kids who try their hardest to get what they want but are denied the ability to go to the college of their choice automatically,” Baum said.