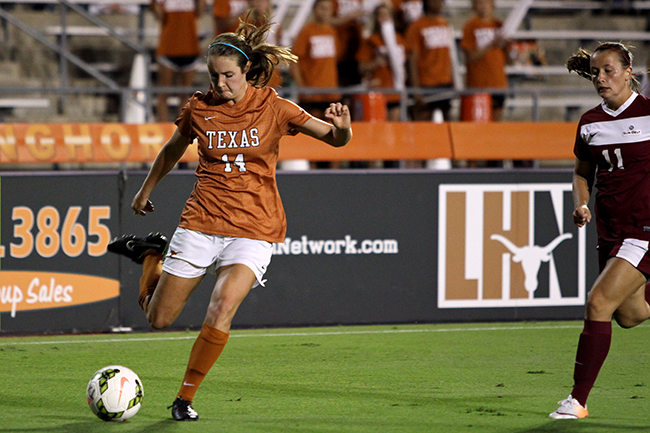 It took a perfect left-footed cross in front of the goal and an even better finish to defeat the Longhorns on Friday night in Austin.

Oklahoma senior forward Devin Barrett dribbled from midfield to the left corner and then sent off a beautiful pass to the right side of the net to junior forward Caren Nelson, who headed in the pass for the game-winning goal. The goal pushed the Sooners past Texas 2-1 in front of a crowd of 548 at Mike A. Myers Stadium.

“That’s a good finish by that young lady at the backside,” head coach Angela Kelly said. “But it goes well beyond getting down there. We needed to win it here on the flank, and we need to be tighter marked in the box.”

Tied at zero at halftime, the Longhorns struck first in the second half. Junior Jasmine Hart booted in a 23-yard bomb into the back of the net. Hart’s goal was her second in as many games, after previously not scoring all season.

“I’ve just gotten better on my shot,” said Hart.  “Whenever I see an opportunity to shoot, I just take it.”

But Oklahoma retaliated quickly. Sooner sophomore forward Jordyn Knox-Webster touched in a goal of her own 12 minutes later to even the game at 1-1.

Texas had its chances but struggled to finish at the net. The Longhorns outshot the Sooners 19-12 and had a 7-5 advantage on corner kicks, as well.

“I thought we created opportunities. We need to go ahead and take advantage of those opportunities, especially in conference play,” Kelly said. “We needed to clean the ball up and just play better. We didn’t play great in the attacking half, so we just need better performances out of our personalities.”