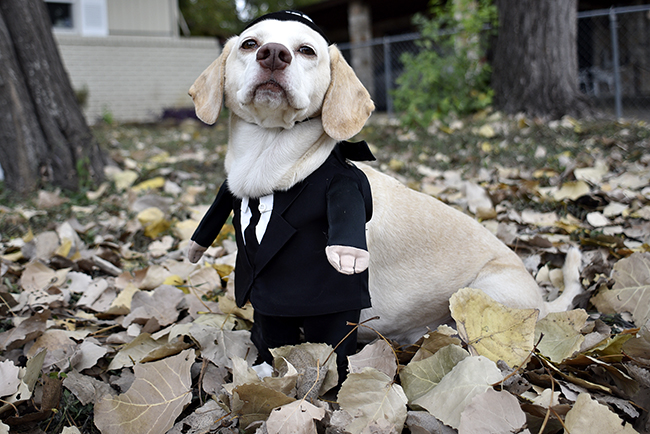 Sid the beagle is running for Austin dog mayor, and his canine platform isn’t something to wag your tail at.

The beagle mix, donning his $250 tailor-made mayor suit, and his owner of five years, Alex Hopes, launched a campaign to elect Sid to office earlier this month. The symbolic position is the first of its kind for the city of Austin and will provide a new outlet for the community to address animal rights issues. The two hope this position will provide adequate representation for dogs in Austin and raise awareness for adoption shelters such as Austin Pets Alive!

When Sid’s former family could no longer take care of him, Hopes adopted the six-month-old puppy, and the two moved from Omaha, Nebraska to Austin a year later in 2011.

“I went down to look at this dog and paid 50 dollars for him,” Hopes said. “I tucked him inside of my jacket at the time because it was snowing. He’s been the best decision of my life.”

There are currently four other dog mayors around the United States, including an actual city mayor that was elected in Cormorant, Minnesota, after taking a majority of the 12 eligible votes casted. Hopes said the humane societies and animal shelters in their respective cities have benefited from the creation of these mayoral positions.

“I think Sid could be the face for a lot of fundraising efforts for these non-profits,” Hopes said. “Sid already has a pretty big following, and, if he can funnel that attention to those causes, then I think that’s a win-win all around.”

International relations senior Dylan Snoddy owns a Jack Russell terrier named Reiley that he adopted from Austin Pets Alive! after coming to college. He said the position of dog mayor would improve the relations between the community and city government.

“I think dogs currently have representation because of the people who live here,” Snoddy said. “Having a figurehead for the community to channel initiatives would be a ‘paws’itive development for animal rights policies in Austin.”

Hopes said the two are using Sid’s social media following to stimulate their electoral dreams. Sid’s Facebook and Instagram profiles depict pictures of him holding food in his mouth or playing with his blue bouncy ball, and his accounts enjoy over 50,000 followers. Hopes attributes his dog’s popularity to his expressive face and carefree attitude.

“I get people who contact me very often who say that Sid is just the brightest part of their day,” Hopes said. “It’s really uplifting to see my dog can make such a large impact on people’s lives.”

Sid’s platform calls for bigger doggy treat portions and naps for guard dogs, but his primary focus is keeping Austin a no-kill city. Sid and Hopes promote adoption from animal shelters rather than going to a breeder and buying an animal.

The mayoral candidate’s initiatives come at a contentious time for the dog-loving community as petitions circulated earlier this month to preserve the life of a dog named Neville. In September, an Austin judge ordered Austin Pets Alive! to euthanize Neville after the dog bit a small child in the face. The current order has now been rescinded in part because of a petition, which received over 200,000 signatures.

“I think animals are playing a much larger role in our homes and our lives,” Hopes said. “We as a society are moving more towards humane rights for animals, and it makes a lot of sense to respect the animal more than we have in the past.”

Hopes said when he and Sid first moved to Austin, he was surprised to see how dog-friendly the city was, with patio space available to dogs at local businesses and open spaces like Zilker Park and the Barton Creek Greenbelt. Today, Austin is ranked one of the top ten dog friendly cities in the United States according to DogFriendly.com.

“All the dogs seem completely happy,” Hopes said. “I think that’s a representation of the people who live here. We want to keep [Austin] a no-kill city because we love our dogs.”