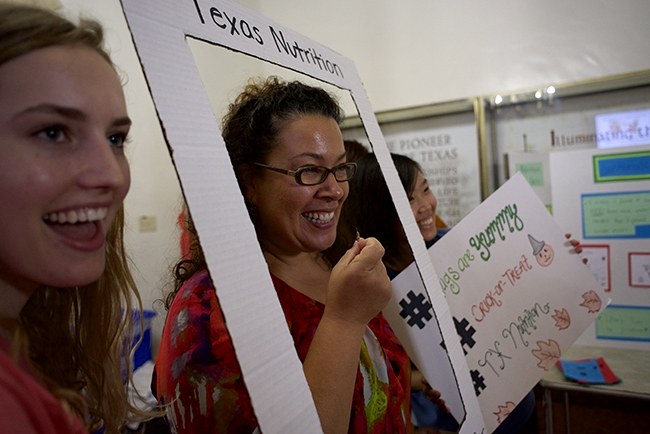 Throughout the country, the edible-insect movement is growing, and at a Food Day event hosted by Texas Nutrition  on Friday, students tried samples of roasted crickets, cricket granola, cricket crackers and cookies flavored with cricket spice packets.

The event overlapped with Campus Sustainability Week and aimed to show students the environmental and nutritional benefits of eating crickets, according to Helen Yuan, Texas Nutrition president and nutrition senior.
Three vendors — Hopper, Crickers and Cramen — gave out samples of food made from crickets at the event.

“Crickers are a sustainable form of protein,” Yuan said. “They use less resources than beef and chicken, but they have a comparable amount of protein. We want to get rid of the stigma that bugs are icky because they’re very good nutritionally.”
According to the Hopper website, crickets use 1,000 times less water for the same amount of protein as beef, while producing 80 times less methane for the same mass. Crickets are also rich in different vitamins and minerals, such as iron and calcium.

Hopper co-founder Marta Hudecova said there are many different ways to eat crickets, such as by roasting them with lime or dipping them in chocolate. According to Hudecova, cricket flour is the most popular way of eating crickets in the western world because it doesn’t look like bugs or have the same texture.

“The flour is a stepping stone to get you to eat crickets, so hopefully people won’t be scared to eat crickets and other types of insects,” Hudecova said.

According to Crickers co-founder Leah Jones, crickets are farmed for consumption in the United States. Austin-based edible cricket companies get cricket flour from Aspire Food Group, where the crickets are fed an organic, gluten-free grain diet to mesh with a healthy lifestyle.

“I won’t say I liked it, but I didn’t dislike it,” Nguyen said. “It was an interesting experience.”

Economics freshman Jacques Pelletier, who tried crackers from Crickers, said that while this was not his first time trying crickets, he had never eaten crackers made from cricket flour before.

“It tasted just like a normal cracker,” Pelletier said. “If you hadn’t told me it had crickets in it, I never would have known.”