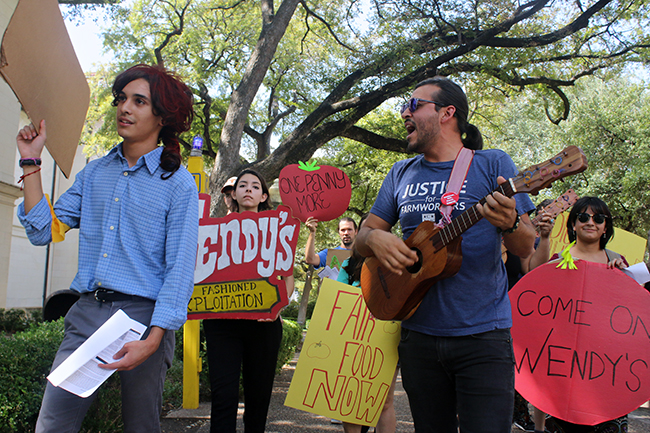 UT’s Student/Farmworkers Alliance delivered a letter in protest of the two Wendy’s locations on campus to UT President Gregory Fenves.

The letter urged Fenves to cut UT contracts with Wendy’s, which has locations in Jester and the Texas Union, as it is the last of the five major fast food giants to holdout from joining the Fair Food Program.

The Fair Food Program requires farms to treat their workers humanely by providing lunch breaks, bathroom breaks, water, shade and the ability to leave the workplace due to health concerns. The letter has been public since Sept. 29 but was delivered to Fenves on Friday. SFA also held a protest on campus against Wendy’s on Sept. 30.

“We take all student opinions seriously,” Susswein said in an email. “The University contracts with the local franchisee operator of the two Wendy’s locations on campus and we encourage anyone with concerns to share their feedback directly with Wendy’s corporate office as well.”

Corporate representatives from Wendy’s were not available for comment at press time.

In the letter, SFA announced their commitment to the “Boot the Braids” campaign — a nationwide campaign boycotting Wendy’s for not joining the Fair Food Program.

Carlos Salamanca, an organizer of SFA, a co-writer of the letter and Latin American studies junior, said the point of the letter is to try to establish a relationship with the University and Fenves to help further SFA’s goals.

“The point isn’t to punish them; it’s to try to get them to change,” Salamanca said. “We make connections [in the letter] between the ways Fenves wants to present himself, which is as a President that concerns himself with the needs of all of his faculty, staff and students. … We wish to speak with him and establish a relationship with him.”

In a previous interview with The Daily Texan, Wendy’s spokeman Bob Bertini responded to the organization’s protest by saying they have no need to join the Fair Food Program because “[Wendy’s] require[s] our suppliers to adhere to state and federal requirements related to worker health and safety, and we are proud to work with responsible companies who share our commitment to quality and doing the right thing.”

Salamanca said he knows change will not be immediate and said SFA looks forward to establishing the appropriate relationships in order to make sure that farmworkers are given basic employee rights.

“We’re ready to be patient,” Salamanca said. “We don’t expect that success will come overnight, but our goal is to keep pressure until one day we can have humane labor conditions.”