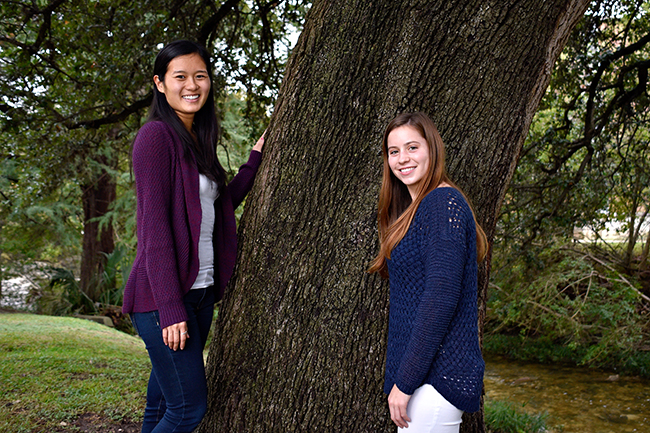 Inside a cramped tent in Blanco State Park, a group of soaking-wet students laugh at their misfortune. It’s 4 a.m., and the Texas State Parks Club is in the middle of their first overnight adventure.

“I feel like college students have so many things to do,” Wang said. “When they are able to come on an outdoor, nature-oriented [trip], it really allows them to relax and take a break from all the non-stop craziness. It’s completely disconnected from everything.”

Clayton said the club has a relaxed atmosphere, with no membership fees and loose plans for every trip. Their primary focus is facilitating a trip that is fun for anyone — from beginners who don’t know how to pitch a tent to experienced backpackers. The club has traveled to Bastrop and Pedernales State Park this semester and plans to take an overnight trip to Inks Lake State Park in November. Although the Facebook group has 83 members, less than 20 typically attend each trip, which Wang said is an ideal amount.

“You really get to know people because all you’re doing is walking, and nothing is really distracting you,” Wang said. “[People] typically start off with basic [small talk] but then start sharing personal stories that I don’t think I would’ve learned if I was just at a meeting on campus or something like that.”

The club started after Clayton proposed the idea for the club to the Texas Parks and Wildlife department, where she volunteered last semester. The department supported her plan to start the club and helped her brainstorm ideas where they could go and how to get started, but she and Wang, who she barely knew at the time, did the rest.

For their first overnight trip, five club members went to Blanco State Park. It rained through the night, and the insides of their tents got soaked because they forgot tarps, but Clayton said she looks back on it fondly.

UT alumnus Alex Sands said he joined the group last semester because it was a good opportunity to explore the state with a group of like-minded people.

“In my experience, hiking has been a very solitary thing,” Sands said. “I used to go out by myself and be alone in the wilderness for a couple days, but now I have a group of people who enjoy doing the same things. It’s an opportunity not only to be out in nature, but also to extend my social circle.”

Clayton said so far the club has had smooth sailing, so she and Wang are considering a longer trip to Big Bend National Park in the future as well as opening up leadership roles such as historian, treasurer and social chair. She said they have a loyal group of regulars who attend most club outings, but now she and Wang are trying to get the rest of the 83 club members on Facebook to come out on a trip.

“It’s hard to convince your friends to wake up at 8 a.m. on a Saturday to go hiking,” Clayton said. “But that’s what we do. A lot of people were looking for something outdoorsy to do, and they found us, so it’s nice that we have been able to fill that void for people.”