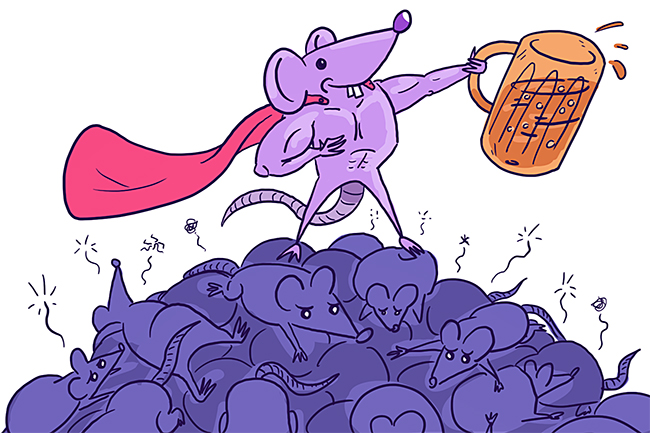 A team of UT scientists have launched a crowdfunding effort for research on what they are calling “supermouse” — a mouse that cannot get drunk.

Jon Pierce-Shimoura, associate professor of neuroscience, will lead the team of postdoctoral researchers, undergraduate and graduate students who will use supermouse to explore possible treatments of alcoholism. UT alumna Angela Ozburn, a professor of behavioral genomics and head of a research lab at Oregon Health and Science University, will also be involved in the supermouse project.

Researchers will manipulate what is known as the BK channel in the nervous system, which is responsible for the body’s reaction to alcohol. The original research, now used by Pierce-Shimomura in upper-level neurogenetics classes, is successful in preventing worms from experiencing the effects of alcohol. Researchers hope their supermouse will produce the same positive results.

“Sure, the mouse can’t get drunk, but it’s a lot bigger than that,” William Shawlot, mouse genetic engineering facility director, said. “In humans, alcoholism is a vicious cycle. Making a drug to prevent withdrawals would have huge ramifications for addiction treatments.”

The supermouse team launched their crowdfunding campaign  Oct. 21 through the UT fundraising site Horn Raiser. Donors can make contributions through Nov. 20. According to Pierce-Shimomura, supermouse research is different because it only costs $12,000 to finance, whereas typical research projects can cost hundreds of thousands of dollars per year.

“We felt that it was important for supermouse to be born in Texas and supported by the UT community,” Pierce-Shimomura said. “Rather than buy a six-pack of beer this weekend, if 1,600 UT students donated the same amount of money to supermouse, we would be on our way to making an amazing scientific discovery.”

Positive results from the supermouse project would eventually lead to a drug development for humans that would reduce the effects of withdrawal and ideally, present patients a smoother road to sobriety.

“Withdrawal is the perfect point of intervention for breaking the cycle of alcohol abuse,” Luisa Scott, UT research associate and supermouse team member, said. “Research supports the idea that minimizing the physiological and psychological discomfort of withdrawal helps reduce chances of relapse. Hopefully, supermouse research will result in treatments that provide support and guidance to patients experiencing withdrawal.”