Clark looks for results, not wins in fall ball 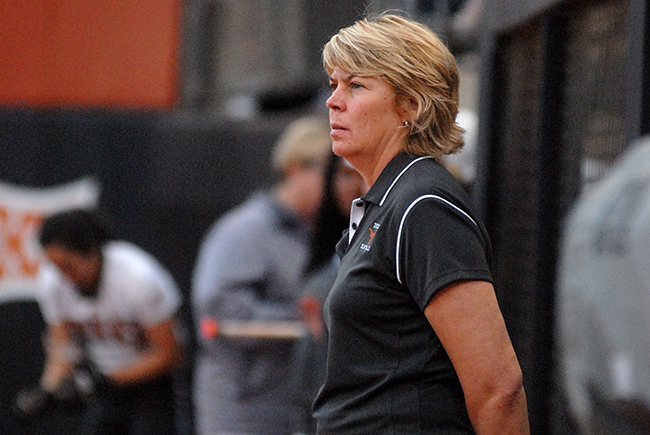 Head coach Connie Clark is focused on goals rather than wins and losses at the halfway point of Texas’ fall schedule.

Clark said she is happy the team is 4-0 thus far, but that’s not what she’s thinking about.

“Outcomes aren’t in my mind,” Clark said. “I just want to see the results of the practice they put in.”

The team is still getting to know each other and find where each player fits in. Clark said she can see team members getting comfortable, though.

“You can see the newcomers getting relaxed,” Clark said. “That’s what we want to see.”

The workload will increase for the team as it advances through the year, but Clark said it’s about keeping it simple for now.

“We’re just now starting our 20-hour weeks so we typically like to schedule a matchup once each of the weeks in the fall,” Clark said. “During these practices, we progressively add goals. We want them to advance in their skills without being overwhelmed.”

Part of the process of easing the Longhorns into the spring is the strict rotations and lineups, as evidenced in the first three games of the fall. In each contest, Clark has worked three pitchers from the mound and stuck to a constant defensive alignment.

“We try to have a set defensive rotation and set grid on our lineup,” Clark said.

“I want them to know what to expect and go out there and execute.”

Texas gets its next chance to execute its game plan Thursday night against St. Mary’s.

The two teams were originally scheduled to play last Thursday, but it was postponed because of weather. St. Mary’s head coach Donna Fields helped guide the Rattlers to a 48-12 record last season.

First pitch is set for 6:30 p.m. at the Red and Charline McCombs Field.